UNC School of Medicine
Skip to main content
UNC Health and UNC School of Medicine
Newsroom
The UNC Health logo falls under strict regulation. We ask that you please do not attempt to download, save, or otherwise use the logo without written consent from the UNC Health administration. Please contact our media team if you have any questions.
Home / Cardiology and Heart Health / “You Shouldn’t Discount A Pain Like That” – Heart attack survivor story

On July 15, 2012, Paula Gee Davis was exercising on her ski machine, like she did every day. Having Lupus and diabetes, Paula understood the importance of a healthy lifestyle, including daily exercise and healthy eating.

However, on this July morning, Paula started having some pain, starting in her left arm and ending in her left thumb. She also had pain behind her lower teeth wrapping around both jaws, as if she required a root canal. She felt pressure on her chest like a heavy weight was resting on it. Thinking she was just working herself too hard, she took a short break from the ski machine, then started again. After 10 more minutes of exercise, the pain was still present.

“I told my husband that I was going to take a shower to relax, then I headed over to a neighbor’s house,” says Paula. “I still had the pain and realized that it wasn’t going away. I started to think it would be very rude to die in my neighbor’s house!”

Her husband, Marc, took Paula to the UNC Emergency Room, where she happily realized that her check-in nurse was the same person who assisted her during a visit in December 2010 for pain in her abdomen. Tests during that visit showed a hiatus hernia and reflux. “She remembered me, gave me a big hug, and was as nice as could be. I knew I was in very good hands,” Paula says.

After cardiac monitoring, her heart attack indicators were high, but not off the charts. At this point, she had been having pain for almost 5 hours. “The ER physician told us, ‘Your symptoms are very distressing’, but I didn’t believe it was a heart attack. I thought people who had heart attacks had intense pain, and then the pain stopped or they died.”

However, Paula and Marc found out that Paula had indeed been having a heart attack, though not a classic heart attack as most people think of them.

“My wonderful physician, Dr. Paula Miller, as well as other cardiologists at UNC Hospitals, explained that I had an arterial spasm,” says Paula. “Instead of the artery expanding during my exercise as it normally would, it contracted, cutting off the blood supply to my heart.”

Paula stayed in the hospital for two days, receiving medicine and care in the UNC Cardiac Catheterization Lab to see if she had any blockages or damage to the chambers of her heart.

“Dr. Miller and the other physicians were extremely supportive. No one judged me because I took so long to come to the ER or because I didn’t recognize the signs of a heart attack,” says Paula.

“I know now that I should have called 911,” says Paula. “When anyone has a chest pain, and they can’t discern what it is, they need to be more responsive than I was. You shouldn’t discount a pain like that.”

One month after her heart attack, Paula started Cardiac Rehabilitation at the UNC Wellness Center at Meadowmont. She attended rehab classes three times week for three months that included an EKG “paddle check” during each visit to make sure her heart rhythms were good. She learned new ways to warm-up before exercising, was taught to monitor her heart rate during her workouts, and mastered new cool-down stretches.

Paula says, “I wanted to do everything I could to help myself, and UNC Cardiac Rehab truly focuses on the total health of the patient.”

Paula also credits a supportive family in her recovery, including Marc, daughter Irma, and grandson Elijah. “They were an important part of my recovery. And I have a new grandson arriving in April 2013, so I plan on retiring in June to become a stay-at-home grandma!”

While having a heart attack changed her life, Paula says, “It’s not the worst thing in the world. I want people to know that having a heart attack doesn’t mean that you have to stop doing the activities that you love. People need to be aware of the symptoms, get treatment quickly, and follow your doctor’s orders during your recovery.”

Dedicated to exercise, Paula Gee Davis takes a break at her office to walk and stretch, one of the many tips she learned in UNC Cardiac Rehabilitation. “I will never exercise again without a good warm-up and cool-down,” she says. 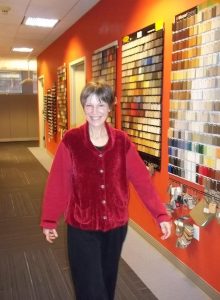