Chapel Hill resident John Caruso had been struggling with heart irregularities – atrial fibrillation – for a few years, and he was not responding well to his medications. His physicians at the UNC Center for Heart and Vascular Care at Meadowmont recommended a cardiac catheter ablation to regulate his heart. After this recommendation was made, the staff in the Open Access Referral Center went to work to make sure Caruso received the best treatment possible with the least amount of interruption to his life.

Atrial fibrillation (also known as A-Fib) is the most common abnormal rhythm of the heart, affecting 2.3 million adults in the United States. In a person with normal heart rhythm, the heart muscle is stimulated to squeeze by electrical impulses arising in the sinus – or SA – node, which serves as the body’s natural pacemaker (see Figure 1). In patients like Caruso, the orderly progression of electrical impulses is replaced by many rapid and chaotic impulses. This leads to very chaotic squeezing of the heart at very fast rates, which can cause inadequate flow of blood to the rest of the body. 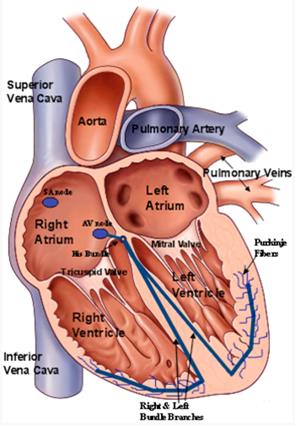 Cardiac catheter ablation uses radiofrequency ablation to produce electrocautery injuries to the heart, which in turn produces lines of electrical isolation within the heart. In the late 1990’s, a key observation was made which showed that electrical activity within the pulmonary veins, which drain into the left atrium, often provoked atrial fibrillation (see Figure 2). By creating barriers to electrical conduction around the pulmonary veins of the heart, atrial fibrillation can be controlled and hopefully, eliminated. 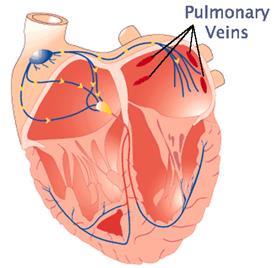 When Caruso’s physicians at the UNC Center for Heart and Vascular Care at Meadowmont contacted the Open Access Referral Center to schedule Caruso’s ablation at UNC Hospitals, the Referral Center nurses handled the legwork. They compiled the necessary medical records, recorded Caruso’s medical history for the surgeons, and scheduled all necessary appointments that Caruso needed prior to the ablation, involving multiple tests in different departments throughout the hospital.

On the day prior his ablation in January 2013, Caruso was met at UNC Hospitals by the A-Fib Coordinator for the UNC Center for Heart and Vascular Care. The coordinator helped Caruso navigate the hospital, made sure he arrived at all of his tests in time, and got him orientated for his procedure the next day.

“UNC has a complicated layout for people who haven’t experienced it,” says Caruso. “I had the printed-out schedule of my day, which kept me organized, and the helpful orientation by the A-Fib coordinator – my personal ‘tour guide’ – was very appreciated.”

Before a cardiac ablation, a patient typically requires multiple tests and scans. Patients have a cardiac CT scan, which provides a detailed picture of the inside of the heart. Ablation patients also have a TEE, which is a transesophageal echocardiogram. They review their history and medications with a nurse practitioner, and then patients head to the Pre-Care department for blood work and pre-anesthesia evaluation if needed.

During Caruso’s visit, the coordinator stayed with him and his family, bringing them from one location to the next and making sure that all of the tests were completed.

On the day of his ablation, Caruso said a “fairly large group of people” attended to him in the operating room, but once the procedure began, he was sedated.

Upon waking, Caruso “felt pretty well”, but to make sure there was no further bleeding, he had to lie quietly on his back for the next few hours. “Being still is very important, but it is very hard to lie on your back for two hours and not move,” says Caruso.

Caruso stayed overnight at UNC Hospitals and then headed home to recover. “During my overnight stay, the nursing staff was terrific,” Caruso says. “I found them to be especially attentive, caring, and empathetic people, and they made me feel confident that I was receiving the best care possible.”

Caruso adds, “They gave me the impression that I was important to them, and they went well beyond what was simply necessary to get me through the 24 hours that I spent in the hospital.”

After a few days at home, Caruso noticed swelling in his left thigh. Bruising (hematoma) at the site of the catheter insertion can arise after a cardiac catheter ablation. Since the procedure is done percutaneously – through the skin – a catheter is used to guide the physicians to the patient’s heart. The bruising is generally relatively benign and resolves over time.

“I was pretty anxious about it,” admits Caruso. “I didn’t expect it.”

Caruso made a visit to UNC Hospitals for an ultrasound to make sure there was no additional bleeding. The ultrasound showed no bleeding. “After three or four days, the pain was much better. I actually took a trip to Florida shortly thereafter,” he says with a smile.

He continues with his follow-up appointments, and he is living his life, enjoying a regular heartbeat.

“I am very pleased to be off my blood thinner after several years, and I’m feeling fine.”

The Open Access Referral Center was founded in January 2009 with two registered nurses and one administrative associate. At that time, they handled internal and referring physician requests for procedures in the cardiac catheterization lab and the electrophysiology lab.

Due to the positive response from physicians and patients, the Referral Center made plans to expand to include all four divisions of the UNC Center for Heart and Vascular Care: cardiology, vascular surgery, adult cardiac surgery, and vascular interventional radiology.

The Referral Center and the four divisions of the UNC Center for Heart and Vascular Care pooled their resources to triple the size of the staff, moving administrative associates from clinics into the referral center, making this growth budget-neutral. The coordination offered by the Referral Center means fewer patient visits to UNC, better customer service, increased availability of up-to-date lab work, and the proper diagnostic testing completed on time.

To schedule an appointment, admission, transfer or consultation with the UNC Center for Heart and Vascular Care, call the Open Access Referral Center at 866-862-4327.