Kevin Kelly, MD, a recent transplant from Wisconsin, adjusts to life in North Carolina (complete with startling wildlife encounters) and settles into his new role as pediatrician-in-chief of N.C. Children’s Hospital and vice chair for clinical operations of the UNC Department of Pediatrics. 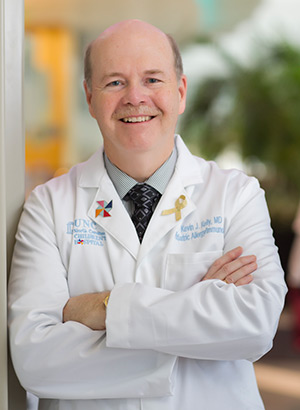 Ask Kevin Kelly, MD, about his first five months in North Carolina, and he’ll likely remark on pleasant summer weather, the state’s interesting geography, the Triangle’s wonderful cultural offerings. And he may bring up his one complaint—the snakes.

“The snakes in Wisconsin look like worms compared to North Carolina snakes,” says Kelly with a chuckle. “We had a couple of four to five foot snakes in our backyard, and when you find one with a frog in its mouth, it’s just disconcerting.”

Snakes aside, Dr. Kelly is settling into life as a North Carolinian and into his new role of pediatrician-in-chief of N.C. Children’s Hospital and vice chair for clinical operations of the UNC Department of Pediatrics.

Since assuming the positions in May, Dr. Kelly provides medical oversight for the inpatient and outpatient clinical operations at N.C. Children’s Hospital. He works in close conjunction with Melanie Dawes, RN, MBA, MHA, overseeing the day-to-day operations of all Children’s units, services and pediatric divisions and collaborating with various support and ancillary services within UNC Hospitals.

Dr. Kelly is board certified in pediatrics, pediatric critical care medicine, and allergy /immunology. His clinical duties at the Children’s Hospital are focused on allergy and immunology, and he brings with him an impressive 30+ “best doctor” accolades as a clinician.

Dr. Kelly is also a leading international expert on latex allergy, a subject about which he has published more than 100 peer reviewed articles and abstracts. He was involved in the discovery, science, epidemiology and prevention of latex allergy. His work in collaboration with the Center for Disease Control, the National Institute of Occupational Safety and Health, other investigators, and the latex industry has contributed to the near eradication of latex allergy in healthcare workers and patients with spina bifida. The condition was once an epidemic in those populations, with about 17 percent of healthcare workers developing an IgE antibody mediated hypersensitivity to latex and nearly 70 percent of patients with spina bifida developing the problem.

“It is satisfying in my lifetime to have been on the leading edge of discovery of a new disease and to have contributed substantially to the eventual prevention and near eradication of the problem,” reflects Kelly. 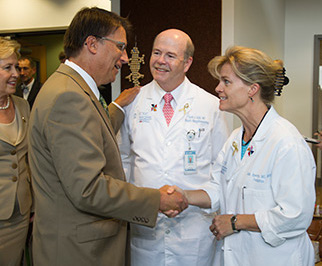 Among the many reasons Dr. Kelly was drawn to UNC was the Children’s Hospital’s position as a public children’s hospital within a larger health care system.

“The advent of a system of accountable care, the embracing of preventive care in our country, focused from pre-birth through geriatrics, places the free-standing children’s hospitals in a difficult position as to how they integrate the systems,” he says. “I felt that the University of North Carolina was ideally positioned to advance these principles because of the complete integration of the North Carolina Children’s Hospital within a complete system of care, and I wanted to be involved in that.”

Dr. Kelly also cites collaboration between the School of Medicine and School of Public Health and the Children’s Hospital’s leading-edge research endeavors as major strengths of the institution.

“UNC is one of the most successful research universities in the country,” he says. “I don’t believe an integrated system of accountable healthcare delivery at the highest level can be accomplished without an advanced partner in research.”

Before coming UNC, Dr. Kelly served in multiple leadership roles. He served as the chief medical officer for the Medical College of Wisconsin’s Children’s Specialty Group, Chair of Pediatrics at Children’s Mercy Hospitals and Clinics in Kansas City, and as vice chair of financial and clinical operations at the Medical College of Wisconsin, where he also served for a period as interim chair of Pediatrics. He and his wife, Christine Walsh-Kelly, MD, who also joined the Department of Pediatrics faculty, have two sons and two grandchildren.

Despite their recent experience with carnivorous reptiles, Dr. Kelly and his wife are settling in and have much to look forward to in their new Southern home.

“Being back in a college campus with young people who are the future of where we’re going is exciting to us,” he says. “We’ve really loved that so far.”