UNC School of Medicine
Skip to main content
UNC Health and UNC School of Medicine
Newsroom
The UNC Health logo falls under strict regulation. We ask that you please do not attempt to download, save, or otherwise use the logo without written consent from the UNC Health administration. Please contact our media team if you have any questions.
Home / News / Summer camp brings new life skills for kids with hemiplegia

“It’s amazing how much being able to tie your shoe adds to your daily life.”

So says Kim of her son, Will, who has hemiplegia, a condition characterized by weakness on one side of the body due to damage of the brain’s motor sensors. The 8 year old has attended a therapeutic summer camp, Helping Kids with Hemiplegia, for past six years.

“The skills he has learned has helped him progress through life and school,” adds Kim.

Founded by Holly Holland, nine years ago, Helping Kids with Hemiplegia has been a real game changer for kids like Will by employing constraint-induced movement therapy (CIMT).

“I was aware of a similar camp at Medical University of South Carolina and realized the potential,’ says Holland, senior pediatric occupational therapist at N.C. Children’s Hospital. “I thought: ‘We are going to do this.’ We started with 15 kids the first year. This year we have 40.” 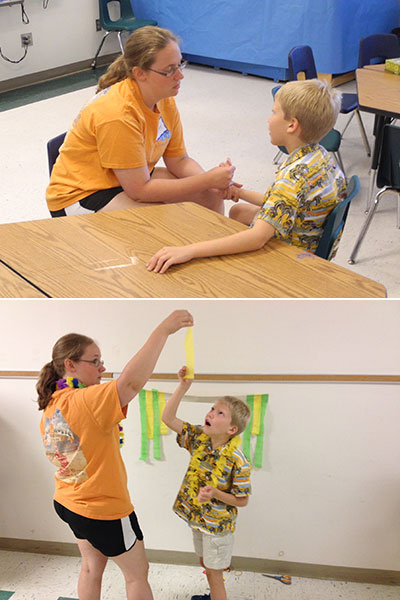 Holland’s work with impaired children made her aware of CIMT, in which a limb is immobilized in order to work and strengthen the weakened limb. She felt that a summer camp setting would be fun and encouraging for this particular patient population, who are most often unable to attend traditional summer camps.

“It’s an opportunity for them to be with other children, to work on their social skills as well as their motor skills,” says Holland of the camp experience. “They can build confidence and make friends. It’s extremely beneficial to their quality of life.”

While campers work on their “Activities for Daily Living” skills, they are helped by volunteers, many of whom are university students working toward their degrees in physical therapy or related programs. The students are given a chance to work on their skills, all the while guided by registered therapists, who also volunteer their time and lead early morning classes for the student volunteers through the duration of camp.

Hemimplegia camp offers programs for the parents, too. Advocates for the disabled have given lectures on dealing with policy makers, attorneys have spoken on legal topics, and adults with hemiplegia have come to speak on their experiences.

“It’s a win-win for everyone,” says Holland. “We have students from UNC, Elon, Duke, ECU, Winston-Salem State, Lenoir-Rhyne and Boston College. They work with the children, attend class, expand their education, and the children get the benefit of individual care. There is at least one student per child—and in some cases two.”

Children and their parents set individual goals for the camp.

“For some it may be doing up their own buttons, putting on a T-shirt or putting on their brace,” says Holland.

Will’s chosen goals this year included tying his shoes and putting on his belt. His mother, Kim, says his ability to perform routine tasks like brushing his teeth has greatly improved over the years due to the skills he has acquired through camp.

“It’s good to start young,” says Kim. “Children’s brains can re-learn skills that may have been lost, or new pathways can get re-routed through the brain.”

After working with his arm for 30 minutes, Will and his student therapist, Amy DiTommaso of Elon University, start on a grass skirt made of tape and crepe paper, part of “Aloha Day.” Themed days provide a fun and creative context for the therapeutic activities that encourage use of weak limbs.

A primary motivator for Holland establishing the camp was the expense, in both time and money, of other such programs. While registration fees of similar programs often cost tens of thousands of dollars, Holland’s camp is offered free of charge, with a donation of $100 encouraged per family.

Living expenses can be another big concern for families.

“One camp was 30 days long, which means that the family would have to rent a hotel room for that length of time, plus provide all the meals needed,” says Holland. “I thought a 10-day camp would make it more affordable.”

Local businesses have donated materials, and Staybridge Suites of Durham has provided rooms at substantially reduced rates for camp families the past few years.

“The cost of offering the camp goes up every year, so we really depend on this generosity,” says Holland, who remains surprised by the camp’s momentum.

“I never thought it would get this big!” continues Holland. “But the satisfaction of seeing children return every summer and the tremendous efforts of the volunteers and student therapists always makes the camp worthwhile.”