UNC School of Medicine
Skip to main content
UNC Health and UNC School of Medicine
Newsroom
The UNC Health logo falls under strict regulation. We ask that you please do not attempt to download, save, or otherwise use the logo without written consent from the UNC Health administration. Please contact our media team if you have any questions.
Home / Migrated / Meet Dr. Elizabeth Estrada, UNC Children’s endocrinology chief

Dr. Elizabeth Estrada joined UNC Children’s as chief of pediatric endocrinology in May 2015. She recently spoke with the editors of CARE about the road that led her to UNC and the passion she’s found in combatting the nation’s childhood obesity crisis.

“I’ve known since high school I wanted to work with children, to be either a pediatrician or a nursery school teacher—and I finally decided on pediatrics,” says Elizabeth Estrada, MD, who became UNC Children’s chief of endocrinology on May 15th.

She explains that her early interest in medicine was fine-tuned during medical school in her native Peru to focus on nutritional issues. After graduation, she worked at the Transitory Home for Children, followed by a chief residency at the Instituto de Investigacion Nutricional.

“The institute was my first real research experience,” she says of her work there. “At that time the problem was malnutrition. Now, of course, it’s obesity.”

Her work with patients continued as she moved to continue her training at State University of New York in Brooklyn, then on to a fellowship at the Hospital for Sick Children in Toronto, Canada. She eventually accepted a position at Connecticut Children’s Medical Center, where she helped found and direct its pediatric obesity center.

“The obesity center offered multidisciplinary care for children with obesity that we started from scratch,” she says. “We offered behavior-based programs and bariatric surgery. We conducted investigator-initiated research and participated in national trials.”

Dr. Estrada became interested in the health challenges frequently found in children with obesity, such as hypertension, lipid and liver abnormalities, sleep apnea, and type 2 diabetes.

“I was shocked to discover young children with type 2 diabetes,” she says. “This used to be a problem associated with older people who had become overweight. Now we are seeing it in children.”

Estrada believes that treatment for these problems is frequently missed, because patients need to be seen by multiple subspecialists to address each health issue. Trying to address this problem at UNC, she has started a clinic where children with obesity can be assessed and treated in a single visit—a service currently offered only in Raleigh.

“We intend to offer support to any provider working with children who are suffering from comorbidities associated with their obesity,” she says. “We are not equipped to offer weight management at this time, but a nutritionist is on site for consultation as needed” 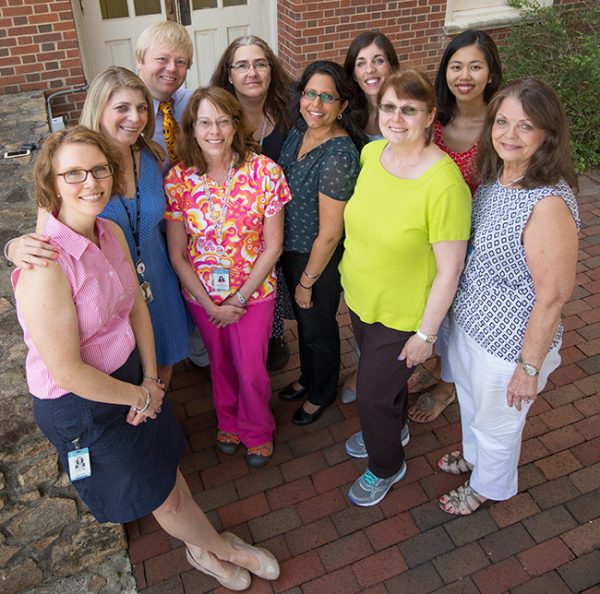 Her passion for this approach comes from many years of treating patients with these problems. Working alongside Dr. Estrada all these years is her husband, Francisco Sylvester, MD, who became UNC Children’s chief of the gastroenterology in October 2014.

“Oh, we met in medical school and have been working together forever,” she says with a laugh. “We were in the same class and have been in the same hospitals ever since—Brooklyn, Connecticut, and now here. We have been very lucky that way.”

Drs. Estrada and Sylvester have two children, one a senior at Northeastern majoring in political science and the other in medical school at Boston University.

“My kids are the center of my life,” she says.

Estrada also professes a life-long interest in active sports in her free time.

“I’ve always loved to exercise—to go to the gym or to run or ride a bike,” she says. “But we have a new thing here in North Carolina: kayaking. There are so many lakes and rivers near our home, and the water is warm, not freezing like in Connecticut.”

In her working hours, Estrada says the division is developing enhancements to its existing multidisciplinary clinics for patients with Turner syndrome, bone disease, and lipid abnormalities, and strengthening the clinic that helps patients with diabetes transition to adult care as they age out of pediatrics.

She says the changes she and her team will implement are being done with one lofty goal in mind: “To provide the best endocrine care for the children of North Carolina, as well as the best service to referring providers.”