When national BMX champion Cameron Moore was injured during a recent race, an ambulance rushed him to UNC’s Pediatric Emergency Department. Aching to get back on the bike and defend his title, Cameron talks about his experience. 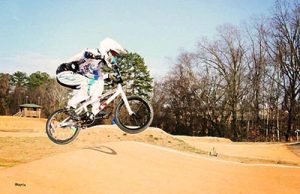 “When I arrived at the emergency room, some of the staff thought I had been in a car crash,” recalls 16-year-old Cameron Moore, a recent patient of UNC’s pediatric emergency department.

Moore, a nationally ranked BMX racer, was injured on a dirt race course while competing in a BMX cycling event.

“Another fellow and I got tangled up, and I was the one who went down,” he explains.

Emergency workers at the race in Burlington, N.C., loaded Moore into an ambulance and transported him to UNC Children’s, where it was determined he had suffered a broken ankle, separated shoulder, and “crushed” scapula.

“We have a Level I pediatric trauma center at a tertiary care center, so it’s typical for us to see a wide variety of injuries and illness,” says Cheryl Jackson, MD, chief of the Division of Pediatric Emergency Medicine at UNC. “Cameron’s injuries were pretty severe but not life-threatening. I attribute this, in part, to his experience and the precautions taken. Although he competes in a high intensity sport, he is a trained athlete and was wearing full protective gear, including a helmet.”

BMX racing, a type of off-road bicycle racing derived from motocross, is a relatively young sport but was notably made into a full Olympic sport in 2003. Moore has been competing on a national level in events sanctioned by USA BMX since 2006, winning his first national championship in 2008 and several more since. In fact, he was national champion in his class for 2013.

“I actually started out in motocross racing, but I was injured, so my parents decided this was a little safer,” Moore says with a laugh.

“In the pediatric ED, we recognize that we always have at least two patients—the child and his or her parent,” says Dr. Jackson. “Many of our patients can’t speak for themselves, and we recognize that parents and caregivers not only act as advocates for their children but also can help ‘interpret’ the non-verbal cues about illness and injury.”

Cameron’s mother, Beverly Moore, states she was very pleased with the care he received in the pediatric emergency department and during his follow-up surgeries for his shoulder and ankle injuries. She’s taking the situation in stride and looking to the future. “We hope Cameron will be able to take advantage of his success in BMX and possibly receive a college scholarship for one of the several schools that now have cycling teams.”

As for Cameron Moore, he sees injuries as part of a competitive life and is already up and around. He’s states doctors told him it will take five to six weeks for his ankle to heal and five to six months for his shoulder to be whole.

“Mostly what I have now is soreness,” says Moore. “I can walk with crutches, and I start physical therapy for my shoulder soon.”

That’s not keeping him down. He says he’s ready to get back on the bike as soon as the doctors allow it.

“I need to be training,” he says. “The championships are in November, and I plan to defend the title I won last year.”

“If anyone can come back and defend his title, it’s Cameron,” says Dr. Jackson. “He certainly has the drive and determination—but I hope his comeback is on the BMX track and not in the pediatric emergency department!”

“The door to the ED is always open should he need us,” adds Jackson, “but I would much prefer to see him walk through it—and wouldn’t it be sweet if he had a trophy in hand?”