A grandson’s care leads Ward and Julia Marslender of Raleigh, N.C., to establish a $1 million bequest that will help UNC Children’s train the next generation of pediatric specialists in nephrology and urology.

A grandson’s care leads Ward and Julia Marslender of Raleigh, N.C., to establish a $1 million bequest that will help UNC Children’s train the next generation of pediatric specialists in nephrology and urology.

It’s been nearly three years since their grandson, William, had his last major surgery, but walking past the surgical waiting room on the second floor of N.C. Children’s Hospital, Ward and Julia Marslender remember the anxiety and anticipation they felt that long ago day in May 2012.

“Looking at those families really takes me back,” says Julia, the diminutive lady known to her grandchildren as “Big J,” her eyes reflecting heartfelt empathy. “The waiting is the hardest part, even when you know they’re in good hands.”

The couple’s Tar Heel roots go back nearly 60 years, to 1958, when Ward Marslender, Jr., entered UNC on an athletic scholarship. He played both basketball and football and went on to become a three-year letterman as a halfback on Carolina’s football team, including his senior year as co-captain in 1962. 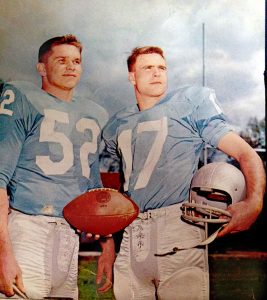 After graduating from UNC in 1963 with dual Bachelor’s in economics and political science, Ward declined a draft offer from the NFL’s Detroit Lions to attend U.S. Navy Officer Candidate School in Newport, R.I. He served four years on active duty, the last 18 months in the South China Sea on the USS Ashtabula-A051 supporting the Vietnam War effort.

Following an honorable discharge in 1967, the former Navy Lieutenant, j.g., moved to Raleigh, N.C., and helped start a textile business the next year. He met Julia Edwards, the younger sister of one of his Phi Gamma Delta fraternity brothers, shortly after returning to North Carolina. The two began dating in 1970, the same year that Julia graduated from UNC with a degree in early childhood. Julia spent the two years following her graduation teaching second grade in Virginia Beach.

In 1972, Ward left the company he had started and, with partners, purchased a similar, smaller business. That September, he and Julia married, and in the years that followed, the Marslenders had four children.

After more than a decade in the textiles industry, Ward sold his interest to his partner in 1980. The following year, he joined A.G. Edwards and Sons brokerage firm, where he spent more than 25 years as an investment advisor. He and his partners, Daniel West and son, Ward, III, started Marslender-West Asset Management, LLC, in 2013.

While Ward had a successful career outside the home, Julia had an equally fulfilling vocation inside the home. The petite and charming woman dedicated herself to raising their children and volunteering her time at their various schools and at Wake Relief.

“The carpooling alone was a 10-man job,” laughs daughter, Drake. “How she managed getting the four of us to different schools, countless activities, and every sporting team Raleigh had to offer is beyond me!”

Julia’s commitment to cultivating their kids’ athletic interests was time well spent. Three of the four went on to play varsity sports at UNC, Elizabeth and Julia playing soccer and Ward, III, golf. Elizabeth and Julia both co-captained national championship teams their senior years, in 1996 and 2000 respectively. These happy connections to their alma mater certainly enhanced the couple’s fondness for the University, but it wasn’t until 2009 that the near lifelong Tar Heels developed a tie to UNC they never imagined they would have.

It started with what should have been happy news: the arrival of their second grandchild, William, in January 2009. Though he was born almost full term following an uneventful pregnancy, his mother, Drake, remembers his first week in the community hospital where he was delivered as chaotic and terrifying.

Not breathing. Resuscitation. Fluid in the lungs. Sepsis. Poor prognosis. These were all terms the family heard in connection to William’s condition, but never a diagnosis. As their 9 lb., 3 oz. newborn lay in the NICU hooked up to monitors and an antibiotic drip, Drake and her husband, Barry Neff, anxiously awaited the periodic opportunities they were permitted to visit their son.

“We were only allowed to see the baby at certain times, and parents weren’t allowed to participate in rounds with the doctors, so we were lost,” recalls Drake. “On day three, we overheard a doctor talking to a nurse about a baby with renal failure, and Barry was like, ‘They’re talking about William.’ When I asked, the response was, ‘What are you, a nurse?’ We never got an explanation, only that the prognosis wasn’t good. It felt like we were waiting for him to die.”

“They couldn’t fly him because of the snow, so we waited for the ambulance to get there,” recounts Drake. “One of the nurses said, ‘This is your ticket out.’ And that was so true. The first person we met (at UNC) was Dr. (Martin) McCaffrey. He looked at us and said, ‘He’s going to be okay. William’s going to be okay.’ It was the first time we dared dream we’d be able to bring him home. Day seven became day one of our lives with him.” 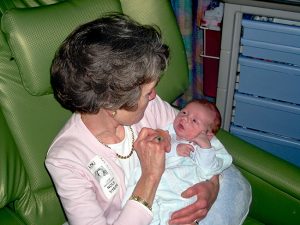 “He looked like a fifth grader compared to the other tiny babies,” reflects Ward. “You couldn’t see his problems by just looking at him—and even now, he looks like a strapping, healthy, young boy.”

Doctors at UNC soon provided an explanation for those medical problems: bilateral grade V renal reflux. William lacked valves between his bladder and ureters, the tubes that connect the bladder and kidneys. With urine able to backflow into his kidneys, neither fully developed.

The families developed an immediate confidence in William’s UNC Children’s care team, which included nephrologist, Bill Primack, MD, and urologist, Richard Sutherland, MD, who rounded with the new parents in the NICU every day. After 12 days, William was well enough to be discharged, but the same specialists continued to follow him, seeing him as an outpatient several times a year. In May 2012, William had major surgery, a ureter reimplantation to repair the tubes that connect the bladder and kidneys. 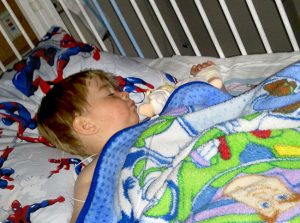 “Right now he’s stable, and you’d never know anything is wrong with him,” explains Drake, “but he’ll still need a kidney transplant five to 10 years down the road.”

It’s those “down the road” years Ward and Julia Marslender had in mind when they first started considering a substantial gift to UNC Children’s in their estate planning.

“Like any parent, we’re concerned for our children and grandchildren; if they hurt, we hurt,” explains Ward. “You certainly don’t know young in your career how things will go, and we feel blessed we are able to do this, to make a difference in the future for not just our family but for other families.”

According to Drs. Primack and Sutherland, the Marslenders’ gift is unique not only in the generosity of the amount but in its focus, with funds to exclusively support education in the arenas of pediatric nephrology and pediatric urology—a choice influenced by Julia’s early career as a school teacher.

“The U.S. has a moderate shortage of specialists in these fields which is likely to get worse over the next 10 to 15 years as many of those currently in practice retire,” states Dr. Primack, who himself retired in December 2014. “The Marslender bequest will help ensure that, going forward, UNC is able to support trainees and provide well-trained physicians to care for future generations of children like William.”

“Training the next generation of pediatric urologists and nephrologists at an academic medical center like UNC is as much an investment in future research as it is an investment in future care,” adds Dr. Sutherland. “At present, there are areas of research in genetic markers to predict future disease progression, outcome analyses of an actual intervention’s success, and much more that has the potential to revolutionize the care of children with lifelong disease.”

Both doctors attended the Marslenders’ celebration visit, which included a sunroom luncheon at the Lookout Terrace on 7 Children’s. “Party today, no shots,” jokes Dr. Primack as he and his former patient play in the pirate ship outside.

William simply smiles in response. According to his mom, the boy takes a lot after his maternal grandfather: intelligent, quiet, funny but understated, and every bit an athlete.

“He plays baseball and soccer, but what he really wants is to play football like Granddaddy,” says Drake with a smile, a hand on her pregnant belly.

William will welcome a little brother in June. Although William’s condition is congenital, the odds of his brother being born with it are extremely low. Still, the family knows they can rely on UNC Children’s should the need ever arise. It’s one of the reasons Ward and Julia chose UNC Children’s for their legacy gift.

“There are so many worthwhile charities out there, everywhere you turn, a great crying need,” says Ward. “There are lots of places we could have gone, lots of opportunities to make a gift, but the fact that William got such great care, we both felt strongly about our choice.”