Traditionally, graduate educational areas such as medicine, nursing, and pharmacy have driven UNC-Chapel Hill’s commitment to medical simulation on campus. Today, undergraduates may also participate in simulation through a new course taught by the School of Medicine’s Clinical Skills and Patient Simulation Center.

Since joining the UNC School of Medicine in 2014, Gene Hobbs has devotedly – and obsessively, he jokes – taken stock of simulation resources across campus.

Hobbs would know. A Certified Healthcare Simulation Educator, he has worked in the field for nearly two decades. Thirteen of those years were in medical simulation at Duke University Medical Center. Last year, as he realized how many simulators were on the UNC campus and how many medical educators were utilizing simulation to reach learners, he had an idea to help spread the simulation reach to even more UNC students.

“We thought, ‘There’s so much going on with simulation here – why not give future professionals a chance to become familiar with opportunities they may have down the road, as they consider their careers?’” he says.

Hobbs and his colleagues at the Center including director Julie Messina, along with the UNC School of Medicine’s Kurt Gilliland, PhD, Assistant Dean of Curriculum and Evaluation, and Julie Byerley, MD, Vice Dean for Education and Chief Education Officer, agreed. So, this past fall, in conjunction with the College of Arts & Sciences at UNC, the School of Medicine began offering, “Introduction to Medical Simulation,” a course led by Hobbs and co-instructed by Messina.

The course focuses on understanding the integration of simulation technology into clinical education, patient safety, and research applications. It emphasizes the importance of teamwork and communication skills in achieving improved patient outcomes and better health care. The course will be available to undergraduates again this fall. 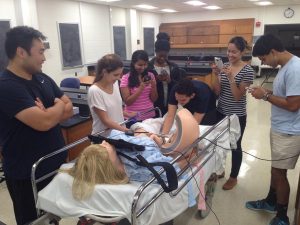 Hobbs describes the first offering as a major success – and so do his students.

“I learned the value of communication and feedback when working in a team,” says UNC senior Gayatri Rathod. “No matter what field I find myself in after my education, the skills I’ve developed in huddling, shared mental models, debriefing, handoffs, and so on will be invaluable when attempting to solve a problem as a team, preventing mistakes, and increasing efficiency in job performance. I will not forget the importance of what I learned in the course.”

Like their fellow classmates, both students planned on future careers in medicine before taking the class and were further encouraged to pursue the medical field after completing their education. In fact, seven of the eight students who took the course decided to serve as volunteers at the Center during the spring 2016 semester, which helps the Center meet the growing demand for simulation at UNC as well as increase utilization of the simulation equipment.

“I thought that the hands-on approach and practice that was used for much of our class were very effective learning methods,” Au says. “This class has strengthened my future plans to enter the medical field.”

Upon completion of the course, students were able to describe the fundamental concepts of utilizing simulation in education; identify opportunities to appropriately apply simulation into a curriculum; distinguish differences between different modalities of simulation; recommend simulation resources to meet instructional or research needs; discuss potential and actual impact of simulation resources in education; lead debriefing following medical team communication training; and demonstrate an understanding of the skills and concepts of TeamSTEPPS, an evidence-based approach to teaching teamwork in high-risk environments.

As for Hobbs, he found teaching the course particularly rewarding. His own path to medical simulation did not include an organized introduction to the field. Instead, the Fayetteville native’s interest in simulation began with a passion for scuba diving, which was developed while he was an undergraduate student at North Carolina State University. As he became a certified diver and instructor, he increasingly became interested in how diving was being used for medical research, which led to a position in hyperbaric chamber simulation at Duke University Medical Center and eventually in medical simulation.

“While my path to and through the field has been an incredibly rewarding journey,” he says, “I wish a course like this had been available to me. For the older generation of simulation professionals, we never had this educational opportunity. It promises to open doors for future medical simulation educators and to foster greater understanding of the role of medical simulation among younger learners, who may one day be practicing physicians, nurses, pharmacists, or simulation educators.”

Hobbs will teach the course again in fall 2016 and likely increase the number of enrollees from eight to nine, which will allow students to work in three three-person teams, giving them more hands-on experience and more opportunities for students to lead. Hobbs, meanwhile, will continue his dual roles with the Department of Pediatrics and the Clinical Skills and Patient Simulation Center. In these capacities, he runs in situ simulations throughout the Children’s Hospital and provides simulation experiences for UNC Hospitals’ interprofessional teams.

“Gene was highly recruited to the Department of Pediatrics and the UNC School of Medicine’s Clinical Skills and Patient Simulation Center because of his almost two decades of experience in the simulation world,” says Benny Joyner, MD, associate professor of pediatrics and anesthesiology and director of the Center.

Dr. Joyner says that Hobbs’s accomplishments in the short time he has been at UNC, including the new introductory course offering for undegraduates, have had a tremendous impact on the simulation programs at the School of Medicine and UNC Hospitals.