UNC School of Medicine
Skip to main content
UNC Health and UNC School of Medicine
Newsroom
The UNC Health logo falls under strict regulation. We ask that you please do not attempt to download, save, or otherwise use the logo without written consent from the UNC Health administration. Please contact our media team if you have any questions.
Home / Awards, Rankings and Recognitions / UNC Health Care receives high marks in latest US News & World Report Ratings 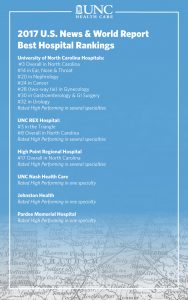 The U.S. News rankings are based on attributes such as patient volume and safety, hospital reputation, and quality.

“We strive to provide individualized care for all of our patients, centered on our key philosophy of empathy and expertise,” said William L. Roper, MD, MPH, CEO of UNC Health Care. “I have the opportunity each day to see this incredible work firsthand, so I’m pleased to see our people achieve such national recognition.”

UNC Hospitals’ highest-rated specialty is Ear, Nose and Throat, which was rated #14 in the nation. The largest jump from 2016 came in Gastroenterology and GI Surgery, which jumped 11 spots to #30.

These high rating add-up to UNC Hospitals being listed as the #2 hospital in the Raleigh-Durham metro area, and #3 in North Carolina.

In addition to UNC Hospitals, several other UNC Health Care facilities were recognized for their excellence.

UNC REX Healthcare is listed as the #3 hospital in the Raleigh-Durham metro area, and #8 in North Carolina. Nine treatment areas at UNC REX were rated as High Performing, including:

High Point Regional Hospital was listed as the #17 hospital in North Carolina and recognized as High Performing in three specialty treatment areas, including:

“The goal of UNC Health Care is to improve the health of all North Carolinians and this year’s rankings from U.S. News & World Report are a clear indication that we continue to meet this mission,” Roper said. “I would like to congratulate our outstanding team on this well-earned recognition.”