UNC School of Medicine
Skip to main content
UNC Health and UNC School of Medicine
Newsroom
The UNC Health logo falls under strict regulation. We ask that you please do not attempt to download, save, or otherwise use the logo without written consent from the UNC Health administration. Please contact our media team if you have any questions.
Home / Migrated / Chronic Bronchitis: New Insights Could Lead to First Diagnostic Test and Better Treatments

CHAPEL HILL, NC – When a patient arrives at a doctor’s office with a persistent cough and the sensation of gunk building up in the lungs, the doctor’s thought process is essentially the same as it would have been decades ago. There has been no understanding of the affected biological pathways causing the gunk buildup in the lung, nor has there been a diagnostic test for chronic bronchitis. UNC School of Medicine researchers are trying to change that.

“Until now, we have had little knowledge of what causes the airway mucus accumulation that plagues chronic bronchitis patients, and the only way we have to diagnose chronic bronchitis is based on what the patient tells us,” said Richard Boucher, MD, director of the UNC Marsico Lung Institute at the University of North Carolina at Chapel Hill and paper co-author. “Frankly, it’s a little embarrassing. Chronic bronchitis is a very common reason why people see their doctor, and we have had no real understanding how it develops or how to diagnose it. This study is a breakthrough in our understanding of this serious condition that affects millions of people in the United States.”

Chronic bronchitis is characterized by recurring bouts of airway inflammation accompanied by a persistent cough and phlegm production. It’s different from acute bronchitis, which typically develops after a cold or the flu and only lasts a few weeks. Although chronic bronchitis has a variety of causes, by far the most common is smoking. Smokers with chronic bronchitis are prone to bacterial infections and face a high risk of developing a more debilitating form of airway inflammation known as chronic obstructive pulmonary disease (COPD), which has no cure and is the third leading cause of death in the United States.

A key mystery has been what causes the accumulation of mucus in the lungs of chronic bronchitis patients – an accumulation that produces symptoms and disease progression. This UNC-led study suggests that the inability to normally hydrate airway surfaces leads to increased mucin concentrations and the accumulation of mucus in the lung. This process then leads to phlegm production and chronic airway infections typical of chronic bronchitis patients.

“Chronic bronchitis symptoms are often the first tip that a patient will go on to develop COPD,” said Boucher, the James C. Moeser Eminent Professor of Medicine at the UNC School of Medicine. “We always 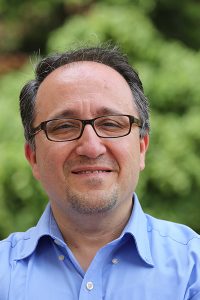 tell patients to stop smoking, but to really convince somebody to stop smoking, it helps to have a clear understanding of what causes their symptoms and have an objective measurement to say, ‘look, this is abnormal. This is why you are sick.’”

Such a test could also reveal where a patient’s health might be headed in the next five to 10 years.

Kesimer, who is a member of the UNC Marsico Lung Institute, said, “We really wanted to see if we could use this measure to predict risk, in the same way that we use cholesterol measurements to predict cardiovascular disease.”

James P. Kiley, PhD, director of the National Heart, Lung, and Blood Institute (NHLBI) Division of Lung Diseases, said, “This is an important step forward for COPD research. Understanding how characteristics of mucus relate to disease severity and symptoms may help us develop new COPD therapies as well as new ways to predict who will benefit most from different treatments.”

One of the main purposes of mucus is to trap pathogens and clear them from the lungs. But if mucus gets too thick and sticky, it accumulates in the lungs and starts working against you, obstructing the airways and allowing bacterial infections to take hold.

Knowing this, the researchers suspected mucus might hold the key to differentiating true chronic bronchitis from benign conditions. To test their hypothesis, Kesimer and colleagues analyzed phlegm samples from about 1,000 smokers and non-smokers participating in a NHLBI-funded national study of COPD called SPIROMICS.

But mucus, it turns out, is pretty hard to study. Mucins are large, sticky, and fragile polymers; their propensity to clump together and break into pieces makes them challenging to measure.

Based on his previous work analyzing the mucins involved in cystic fibrosis, Kesimer developed an innovative testing protocol to measure total mucin concentration and the concentrations of the two predominant mucins found in phlegm – MUC5AC and MUC5B.

Running the phlegm samples through their tests, the researchers found a strong association between mucin concentrations and chronic bronchitis disease severity and symptoms in SPIROMICS participants.

In healthy people, mucus is about 98 percent water and 2 percent solids (mostly mucin proteins). People with chronic bronchitis fail to normally hydrate their mucus, producing nearly double the overall concentration of mucins as do their healthy counterparts. Mucus hydration is so important that the difference between having mucus with 2 percent mucins versus 4 percent mucins can mean the difference between breathing normally and having gobs of bacteria-trapping phlegm clogging your airways. Mucins in the lung have very narrow tolerances, Kesimer said.

The research is significant not only because it suggests mucins can be used as a biomarker for diagnosing and predicting the risk for chronic bronchitis, but also because it offers new scientific tools to measure mucin concentrations.

“As a next step, we plan to look for ways to translate our findings into a practical test that could find its way into your doctor’s office, not just for chronic bronchitis but also for other muco-obstructive diseases of the lung, such as bronchiectasis and asthma,” Kesimer said.

In addition to helping doctors diagnose chronic bronchitis objectively, the researchers said their work could open doors to new therapies that seek to restore a normal mucus balance by reducing the quantity of mucins manufactured inside airways or rehydrating airway surfaces. Such therapies could potentially help to relieve the burden of chronic bronchitis and other muco-obstructive lung diseases.

Amina A. Ford, Agatha Ceppe, Giorgia Radicioni, and Wanda O’Neal were other significant contributors to this study from the UNC Marsico Lung Institute. A total 25 authors from 14 different institutions contributed to the study.