UNC School of Medicine
Skip to main content
UNC Health and UNC School of Medicine
Newsroom
The UNC Health logo falls under strict regulation. We ask that you please do not attempt to download, save, or otherwise use the logo without written consent from the UNC Health administration. Please contact our media team if you have any questions.
Home / Cardiology and Heart Health / How to Turn Damaged Heart Tissue Back into Healthy Heart Muscle: New Details Emerge 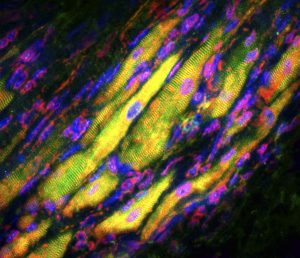 These are induced cardiomyocytes (iCMs) that Li Qian’s lab produced in experiments turning scar tissue into healthy heart muscle.CHAPEL HILL, NC – Reversing scar tissue after a heart attack to create healthy heart muscle: this would be a game-changer in the field of cardiology and regenerative medicine. In the lab, scientists have shown it’s possible to change fibroblasts (scar tissue cells) into cardiomyocytes (heart muscle cells), but sorting out the details of how this happens hasn’t been easy, and using this kind of approach in clinics or even other basic research projects has proven elusive.

Now, in a new study published today in Nature, UNC researchers report a breakthrough. They have used single cell RNA sequencing technology in combination with mathematical modeling and genetic and chemical approaches to delineate the step-by-step molecular changes that occur during cell fate conversion from fibroblast to cardiomyocyte. The scientists, led by Li Qian, PhD, assistant professor of pathology and laboratory medicine at the UNC School of Medicine, not only successfully reconstructed the routes a single cell could take in this process but also identified underlying molecular pathways and key regulators important for the transformation from one cell type to another.

“We used direct cardiac reprogramming as an example in this study,” said Qian, the senior author of this paper and member of the UNC McAllister Heart Institute, “But the pipelines and methods we’ve established here can be used in any other reprogramming process, and potentially other unsynchronized and heterogeneous biological processes.”

When we are babies, embryonic stem cells throughout our bodies gradually change into a variety of highly specialized cell types, such as neurons, blood cells, and heart muscle cells. For a long time, scientists thought these specific cell types were terminal; they could not change again or be reverted back to a state between embryonic and their final differentiated stage. Recent discoveries, though, show it’s possible to revert terminally differentiated somatic cells to a pluripotent state – a kind of “master” cell that can self-produce and potentially turn into any kind of cell in the body. Scientists have also figured out how to convert one kind of differentiated somatic cell type into another without detouring through the pluripotent stage or the original progenitor stage. Such findings shifted the paradigm of cellular hierarchy and revolutionized stem cell research and the field of regenerative medicine. Yet, figuring out how to study the specifics of these processes to leverage them for clinical and basic research has been difficult.

Direct cardiac reprogramming, a promising approach for cardiac regeneration and disease modeling that the Qian Lab has pioneered and fine-tuned in the past several years, involves direct conversion of cardiac non-myocytes into induced cardiomyocytes (iCMs) that closely resemble endogenous CMs. Like any reprogramming process, the many cells that are being reprogrammed don’t do so at the same time. 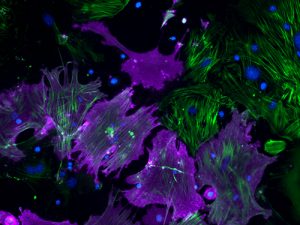 In this study, by using microfluidic single-cell RNA sequencing techniques, Qian’s lab addressed the two main issues of ‘asynchronous’ programming and heterogeneous cell populations. They analyzed global transcriptome changes during fate conversion from fibroblasts to iCMs. Using mathematical algorithms, they identified molecularly distinct subpopulations of cells along the reprogramming pipeline. Then they re-constructed routes of iCM formation based on simulation and experimental validation. These routes provided them an unprecedented high-resolution roadmap for further studies on the mechanisms of cell conversion.

“Some of what we found is clinically important,” Qian said, “For example, we know that after a heart attack, cardiac fibroblasts around the injured area are immediately activated and become highly proliferative but this proliferative capacity decreases over time. How to take advantage of the varied cell cycle status of fibroblasts over the progression of a heart attack and its aftermath would certainly broaden the application of cellular reprogramming for patients and optimize outcomes.”

Qian added, “We demonstrated the routes between cell proliferation and cell reprogramming. We also showed experimental evidence that altering the cell cycle statuses of starting fibroblasts would change the outcomes of new myocyte formation.”

Her team discovered that the molecular features of subpopulations of fibroblasts were differentially suppressed during reprogramming, suggesting that the susceptibility of cells to be reprogrammed varies. Interestingly, this susceptibility coincides with the timing of cardiomyocyte differentiation during heart development. The signatures in the intermediate populations that seem to appear earlier in heart development were more resistant to the alterations. This suggests that the recent epigenetic memories of cells might be more easily erased, and so the fibroblast subpopulations with such epigenetic features are more easily converted into cardiomyocytes.

“Manipulating epigenetic memories – not just changing their current epigenetic status – could be crucial for altering a cell’s fate for therapeutic value,” Qian said.

With further analysis of global gene expression changes during reprogramming, researchers identified an unexpected down-regulation of factors involved in mRNA processing and splicing.

“This is a big surprise to us,” Qian said. “We found that some of the basic cell machinery is dramatically changed, like the machinery for protein production, transportation and degradation, and as we document in detail – mRNA splicing machinery.”

The team continued with detailed functional analysis of the top candidate – the splicing factor called Ptbp1. Evidence suggests it as a critical barrier to the acquisition of cardiomyocyte-specific splicing patterns in fibroblasts. Qian’s research showed that Ptbp1 depletion promoted the formation of more iCMs.

“The new knowledge learned from our mechanistic studies of how a single splicing factor regulates the fate conversion from fibroblast to cardiomyocyte is really a bonus to us,” Qian continued. “Without the unbiased nature of this approach, we would not gain such fresh, valuable information about the reprogramming process. And that’s the beauty of our platform.”

Additional quantitative analysis revealed a strong correlation between the expression of each reprogramming factor and the progress of individual cells through the reprogramming process, and led to the discovery of new surface markers for enrichment of iCMs.

Qian said, “I believe the interdisciplinary approaches in this paper are very powerful. They helped us identify previously unrecognized functions or mechanisms, as well as better understand the nature of a cell and the progression of a disease. Ultimately, this approach could benefit not only heart disease patients, but also patients with cancers, diabetes, neurological diseases, and other conditions. We are very excited about the road ahead.”