UNC School of Medicine
Skip to main content
UNC Health and UNC School of Medicine
Newsroom
The UNC Health logo falls under strict regulation. We ask that you please do not attempt to download, save, or otherwise use the logo without written consent from the UNC Health administration. Please contact our media team if you have any questions.
Home / Migrated / A history of de-prescribing: Why UNC physicians’ approach to opioids is catching on

UNC’s Paul R. Chelminski, MD, MPH, and Timothy J. Ives, PharmD, MPH, CPP, have been sounding the alarm about proper opioid prescribing for decades. Now their treatment methods are the focus of a multi-institutional study on opioid use that could one day change how all health care providers approach chronic pain management.

“Having pain constantly is wearing, and it makes you unhappy and fearful,” said Lynda Cox, who has been suffering from chronic pain for about 20 years.

She says at times the pain was so consuming that it prevented her from living the way she truly wanted – working, playing with her kids, being active – things that bring joy to her life. These days the 51-year-old from Chapel Hill takes the good days in stride, and fights through the bad days.

“Primarily what I deal with on a daily basis is muscle and joint pain, inflammation, extreme fatigue,” Cox said. “And as time has been passing on I’ve been having more problems seeing and keeping my balance.”

Cox’s pain started with her first pregnancy and became severe with the birth of her third child. Since 2001 she’s been diagnosed with multiple illnesses, including hypothyroidism, undifferentiated connective tissue disease and fibromyalgia. She says it’s been difficult for doctors to pinpoint the source of her pain, therefore it’s been difficult to treat. Without treatment she says, “the pain is debilitating.”

Cox was first introduced to opioids after undergoing a caesarean section with her first child’s birth. Even with the lowest dose of the drug she found relief, but it wasn’t lasting. As she continued taking her prescription its benefits slowly began to diminish, leading to increased pain, fatigue and other consequences.

“I was grumpy and difficult to be around.”

Her chronic pain intensified over the years and in 2009 she was prescribed a low dose of the transdermal fentanyl patch. She used the patch successfully without any symptoms of addiction, but it did make her feel unmotivated and less active. In 2010 she began seeing UNC’s Paul Chelminski, MD, a primary care physician and professor of medicine at the UNC School of Medicine.

“There is an immense difference in how Dr. Chelminski treats me versus other physicians I’ve seen,” said Cox. “He actually listens to what you’re saying, but not just the words that come out of your mouth. He also sees what’s going on. He’s aware of your grip when he shakes your hand, how you walk into the room, how your breathing is.”

After consulting with Cox about her treatment, Chelminski continued the transdermal fentanyl prescription as part of her treatment plan. But in 2015 news reports of opioid abuse and concern about her children’s ease of access to her prescription made Cox second-guess the treatment. She took her questions to Chelminski, who started working with Cox on a different way of treating her chronic pain.

“Opioids were never intended to carry the full burden of chronic pain,” said Chelminski. “You need to give patients options, put the choice back into pain management. There’s been too much of an emphasis in the last 20 years on medication as a solution to managing pain.”

Chelminski has been researching alternative methods for managing chronic pain since the early 2000s. He’s been warning physicians about the consequences of over-prescribing opioids for just as long.

“In the 1990s when the use of opioids was first promoted for chronic pain, the recommendation was that patients be carefully selected and that opioid treatment occur with close monitoring of psychological status. Neither occurred,” he said. “No pain medication was ever intended to become the mainstay of pain treatment. Unfortunately, as patients became more dependent on opioids, providers became equally dependent on prescribing them as the centerpiece of treatment.”

Chelminski says multiple things contributed to this view of opioids and pain. The Joint Commission–a non-profit which accredits more than 21,000 U.S. health care programs and organizations–introduced its Pain Management Standards in 2001. Those standards led to pain becoming the fifth vital sign, requiring physicians to ask patients to rate the amount of pain they’re experiencing. This created concern amongst doctors that they would be judged on their patients’ discomfort, not their ultimate care. Chelminski says this atmosphere – coupled with inaccurate representation and marketing of opioids by pharmaceutical companies – led to a culture of prescribe first, ask questions later. It’s a culture he and fellow UNC physicians have been trying to break.

“In many respects, we’re an opioid reduction service,” said Timothy Ives, PharmD, professor of pharmacy at the UNC Eshelman School of Pharmacy, adjunct professor of medicine and director of the Pain Management Program in the Division of General Medicine and Clinical Epidemiology at the School of Medicine. “If the patient doesn’t have a true indication for opioids, then we start them on the targeted medications that they do need.”

Ives and Chelminski worked together on a study in 2006 that found opioid misuse occurred frequently – about one-third of the time – in chronic pain patients in a pain management program within an academic primary care practice. It was concluded that chronic pain is often accompanied by psychiatric comorbidity and disability, and they suggested that structured monitoring for opioid misuse can potentially ensure the appropriate use of opioids and reduce adverse public health effects of diversion.

Chelminski and Ives closely monitor their own patients for the depression and anxiety that often complicate chronic pain. Ives said chronic pain can sometimes be manifestations of mental health issues, rendering opioids useless as a treatment. He said in other patients severe pain can affect mood and personality. Both are reasons why he often advises his patients to see a psychologist or psychiatrist, which can ultimately aid in creating a treatment method that suits each individual patient’s needs, with or without opioids.

Cognitive behavioral therapy (CBT) is a behavioral and psychological intervention that has shown great promise in improving pain outcome and has become the intense focus of research interest among physicians who treat patients with pain. “These treatments allow patients to explore how they cope with illness and the pain,” explained Chelminski. “CBT has been shown in counseling and behavioral health settings to be very effective in helping patients with chronic pain, but it hasn’t been systematically tested as an intervention in primary care or pain clinics.”

That is, until now. Chelminski and Ives are part of a multi-institutional study to investigate how CBT and motivational interviewing (MI) can reduce the use of opioids for patients managing chronic pain. The $9 million study funded by the Patient-Centered Outcomes Research Institute (PCORI) is led by RTI International and also includes the Mid-South Clinical Data Research Network, which is centered at Vanderbilt University Medical Center, and includes Duke University Health System and the UNC Health Care System. UNC will recruit around 300 of the 1,000 chronic pain patients involved, mostly from UNC’s Pain Center.

“This clinical trial is intended to retrofit pain management and align it with the sensible recommendation that chronic pain therapy should incorporate a strong behavioral medicine component,” said Chelminski, a principal investigator of the study.

The study will compare two interventions to evaluate their effect on opioid dosage, physical functioning and pain-related outcomes. One intervention involves a shared decision-making process where patients and clinicians make evidence-based decisions together that align with the patients’ preferences and values. The other intervention, in addition to the shared decision-making process, uses MI as a goal-oriented counseling technique to enhance an individual’s motivation for behavior change. CBT in group sessions to foster more positive thoughts, emotions and behaviors to help manage pain.

“To some extent, we’ve been doing for years with our own patients what this study is going to do, just not on the same scale,” said Ives, referring to the use of MI and CBT.

The study will last five years: two years of working with patients and gathering data, and three years of analyzing the data. Lynda Cox will be involved in the study as well, as a patient representative. She will help physicians and researchers develop protocols to interact with patients in an effort to make them feel comfortable. They want to develop trust because some patients in the study may have their medication changed as part of the treatment plan, something Cox knows from experience can be frightening.

In her own life, Cox has found a treatment method she’s comfortable with that doesn’t involve opioids. After consulting with Chelminski, in 2015 she started taking gabapentin–a non-opioid drug that targets the nervous system—and focused on healthy eating and physical therapy. 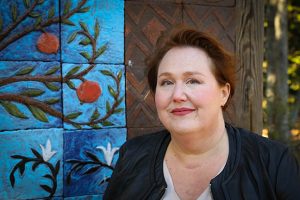 “It’s been 16 years in the making of trying this, trying that, adding this. The medicine probably accounts for a little over half of the benefit I receive. The rest is through diet, movement, and doing something that makes me happy,” said Cox.

Cox still experiences some pain every day, but says she’s learning to live her life despite the discomfort. She’s excited to be involved in a study she believes can teach others with chronic pain that “it isn’t just a medicine that’s going to help you.”

Both Ives and Chelminski have high hopes for the outcome of the study. From their own individual practices they’ve learned what a difference integrating mental health services can make in the treatment of chronic pain. They say this is a chance to prove it on a larger scale and potentially change the way health care providers manage pain by integrating mental health services into all care, especially substance misuse disorders.

Ives said, “My hope is that we can put together a model that can be translated to numerous types of outpatient settings that really gets people more functional with less medication and less medical interventions, and at the same time maintains or improves their quality of life.”