On April 16, Rob Arend and Alex Jeffs spotted each other during the first few miles of the Boston Marathon. The two were excited to see familiar faces in the mass of runners and ran together for several miles. The next day, they were together again, back in Chapel Hill for their Patient Centered Care small group meeting. In between, the two first-year medical students ran 26.2 miles in cold, wet conditions, each achieving a personal best time, and finishing among the top 3 percent of nearly 30,000 runners.

Both Arend and Jeffs qualified for this year’s race before beginning their studies at the UNC School of Medicine.

Throughout their first year of medical school, both said it was important to find time for training, while also remaining focused on their courses.

“During the week, I was probably running fewer miles than ideal, but focusing on higher intensity. On the weekend I really took time for my longer runs,” Arend said. “I have a group of close friends who I run with, so having some accountability to stick to a schedule with them really helped.”

Jeffs said running is a welcome respite from the stresses of medical school.

“I had a set training schedule, and I knew how much I need to run each day. I’d just take that 40 minutes or an hour for myself to relax,” Jeffs said. 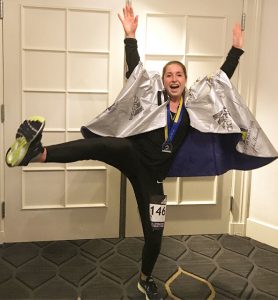 Shelley Warner, a third year medical student who also competed in Boston this year, was able to take time away from her rotations in Wilmington to complete the race. When asked how she fit training into her clinical schedule, she replied simply: “I wake up really early.”

All three said they were appreciative of the support they received from faculty and administration allowing them to miss a day of classes to travel to Boston and compete in the race. This was the first time Jeffs and Warner had competed in the Boston Marathon, and fourth time for Arend, who has run each year since 2015.

“I think people recognize that this is a special event to be a part of, and an accomplishment that was very important to me,” Jeffs said.

On race day, temperatures were in the low 30s, with a steady rain falling throughout the race. In those far-from-ideal conditions, Arend said seeing the crowd lining the course provided him with motivation to keep going.

“Boston and all the surrounding towns really support the race, so seeing people lined up along the course and hearing them cheering was incredible,” Arend said. “I’d much rather run in the rain than stand in the rain.”

Jeffs said he was not prepared for the magnitude of the race.

“I didn’t appreciate how awesome it would be to actually be out there, running in the rain with 30,000 other crazy people,” Jeffs said.

“I’ve never been surrounded by so many other runners all striving toward the same goal,” Warner said. “All throughout the race you could look around and see other runners and people in the crowd offering support.”

Following the race, some food and warm, dry clothes, they were all on planes back to North Carolina, Arend and Jeffs in Chapel Hill for small group, and Warner in Wilmington to resume her clinical rotation.