UNC School of Medicine
Skip to main content
UNC Health and UNC School of Medicine
Newsroom
The UNC Health logo falls under strict regulation. We ask that you please do not attempt to download, save, or otherwise use the logo without written consent from the UNC Health administration. Please contact our media team if you have any questions.
Home / Migrated / These Gummy Bear-Looking Things Will Inherit the Earth

What can we learn from tardigrades, aka ‘water bears,’ these ultimate survivors? And what might they help us figure out regarding human health and disease?

Tardigrades, also known as water bears, are microscopic animals that live basically everywhere on earth, from the hot springs atop the Himalayas to the icy tundra of Antarctica to –almost certainly –your backyard.

Really. Look out the window. There are probably tardigrades all over that tree. Over there on that bush, too. Probably many, many tardigrades.

Under the microscope, they’re cute. They look like gummy bears with four pairs of legs, and they bumble around among the algae clumps.

In your backyard, tardigrades are similarly bumbling around, eating, procreating, crawling out the mouth holes of their egg-filled exoskeletons–you know, the basics–in the moist films on leaves, lichens, mosses, and other vegetation.

Thomas Boothby, PhD, is a research assistant professor at the University of North Carolina at Chapel Hill. A stylized drawing of a tardigrade hangs in his office next to a map of Antarctica, where he spent a month studying water bears earlier this year.

He walks me across the hall to a laboratory full of whirring liquids and electronic instruments, and I’m shown tardigrades through a microscope. It’s true: With their dark eyespots and eightfold paddling, they’re cute.

“These tardigrades are actually going into space,” Boothby says.

Water bears can famously withstand the vacuum of space.

Recently, everyone’s talking about how tardigrades can withstand several kinds of extreme conditions. They can totally dry out for years and then be brought back to life with some water; they can be absolutely blasted with radiation to temperatures reaching 151 degrees C; they’re even “chill” at temperatures around absolute zero, meaning that they can survive the deep freeze and return to normal functionality once, you know, conditions improve. 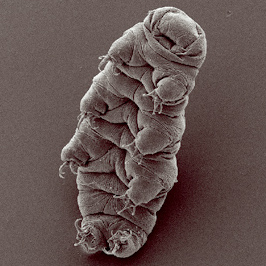 Boothby has published several articles on how tardigrades survive extremes of temperature and dehydration. Basically, they owe their ability to molecules called intrinsically disordered proteins (IDPs).

Under extreme conditions like drying, most animals’ proteins form crunchy, crystal bonds that shred up the fragile things in their cells.

“That’s probably all IDP in there,” Boothby says, gesturing to a tub of liquid in a glass enclosing.

Could tardigrade IDP be used in the service of human health?

We’ll get there, but first…

What is a tardigrade?

Tardigrades form a group of microscopic animals that make up the phylum Tardigrada. This group lies within a larger group of animals called ecdysozoa, which contains nematodes (round worms), and arthropods like the fruit fly.

When you’re ecdysozoan, you molt your exoskeleton every now and again.

Despite ranging in size from five hundredths of a millimeter to one millimeter, tardigrades are complex and have all the trappings of larger animals, including thousands of cells that make up their bodies, nervous systems, digestive tracts, reproductive and sensory organs.

The Conditional Lifespan of a Tardigrade

Most species of tardigrade live for about a month to two months under normal conditions even though they’re really good at surviving extreme environments. One of the tricks they use for survival is to go into a dormant state, in which they have basically stopped all metabolism and gone into suspended animation.

In this state of suspended animation, they can survive for decades. Otherwise, their lifespans are relatively comparable to other animals in the group ecdysozoa, like the fruit fly, which lives for about a month or two under optimal conditions.

Where are tardigrades found?

Tardigrades are found almost everywhere: in oceans, in fresh water, and on land.

You can find them at the bottom of the sea, in rainforests, in really dry, hot places like the Sahara Desert and cold, dry places like Antarctica. They can survive in almost any sort of environmental condition found on Earth.

How they survive extreme(ly bad) situations Interestingly, these extreme conditions have only been created in labs. No place on Earth gets that hot or cold. And it won’t, at least not for hundreds of thousands of years.

So, are water bears from the future? Are they from Mars?

After all, tardigrades can also:

And what does their ability to withstand outer space imply to scientists like Boothby?

“Well, the first thing is that they’re not aliens,” Boothby says. “They didn’t come from outer space; they evolved from ancestral animals that were here on earth.”

Boothby is primarily interested in how tardigrades survive these extremes. His focus has been on that funky group of IDPs.

A closer look at tardigrade IDPs

When tardigrades start to dry out they start making IDPs.

Most proteins have a stable three-dimensional structure that allows them to fold up in a way that is very important for their function.

Tardigrade IDPs, however, do not have a stable 3-dimensional structure. If you look at them in solution, you see them just constantly changing their shape.

What Boothby has discovered is that as tardigrades are drying out they make more and more of these really flexible molecules, and that these flexible molecules start binding. They start interacting with each other. They form a flexible network that can accommodate any size or shape of cellular component being put into it. And when this molecular matrix dries out, say, on a sunny summer day in your backyard, instead of forming a destructive crystalline solid, the flexible matrix forms a smooth, glassy solid.

And then, remarkably, when you add water, this dried-out glassy matrix of tardigrade proteins just dissolves back into the water. The matrix goes away. And all the important cellular stuff that was trapped and protected in it just goes back to business as usual.

Boothby thinks there are a number of applications for this tardigrade research.

“One thing that we’re really interested in is looking at the ability to take these tardigrade disordered proteins, these TDPs, and using them to stabilize and protect biomechanical material like vaccines that typically needs to be kept in what we call the cold chain.”

A lot of vaccines and other protein-based pharmaceuticals have to be kept in a continual chain of refrigerators and freezers that stabilize them from manufacture to shipping and storage.

Some vaccines have to be kept in the cold chain to be effective.

“We might take the cold chain for granted, but in remote or developing parts of the world, keeping things cold can be a huge economic and logistical hurdle. So basically the idea would be to co-opt the tricks that tardigrades are using to stabilize their proteins and cellular components when they dry out and apply those to biomechanical material like vaccines.”

Tardigrade IDP could allow vaccines to be shipped in a dry state, without the need for refrigeration, and “that would really reduce the logistical and economic hurdles to getting medicine to people everywhere.”

Other implications for human health are exploratory. “If we could figure out how tardigrades avoid the harmful effects of spaceflight we might apply those to a number of things that go wrong in humans who stay in space a long time.”

As Boothby is explaining this to me, a fire alarm rings out. No kidding. Assuming some experiment in this glassy matrix of spinning liquids and gadgetry has gone awry, I descend with Boothby and a couple grad students through a sunlit stairwell in the Genome Sciences Building, and we spill out into the brickyard.

We talk some more while the emergency lights flash inside. The fire department shows up in Carolina blue fire engines.

If a fire causes things to heat up in the lab, those tardigrades I was just observing through the microscope will probably be ok, I’m thinking. They’re tardigrades. They’ll survive.

Boothby is a research assistant professor, who works in the lab of Gary Pielak, PhD, Kenan Distinguished Professor of Chemistry at UNC-Chapel Hill with a joint appointment in biochemistry and biophysics in the UNC School of Medicine. Pielak is a member of UNC Lineberger Comprehensive Cancer Center.