UNC School of Medicine
Skip to main content
UNC Health and UNC School of Medicine
Newsroom
The UNC Health logo falls under strict regulation. We ask that you please do not attempt to download, save, or otherwise use the logo without written consent from the UNC Health administration. Please contact our media team if you have any questions.
Home / Migrated / Researchers Reveal Miscarriage Cause, Key Cellular Targets of Potential Drugs

CHAPEL HILL, NC – Tragic miscarriages for a couple have led to a discovery with potentially broad implications for future disease treatments, according to a team of researchers at the University of North Carolina School of Medicine. They identified a previously undiscovered gene mutation underlying hydrops fetalis – a fatal condition to fetuses due to fluid buildup in the space between organs. The proteins at the center of this finding have already been implicated in a number of diseases, opening avenues of potential drug discovery related to migraines, diabetes, osteoporosis, and other conditions.

Published in the Journal of Experimental Medicine, the study showed that this particular gene mutation impairs the ability of a cell receptor called CLR to interact properly with a helper protein called RAMP.

Receptors are special cell surface proteins that take in and transmit chemical signals important for cellular function. And RAMPs are garnering interest from basic scientists and pharmaceutical researchers because they seem to be essential for maintaining the proper folded shape of many important receptors at the cell surface. These findings illuminate key details of how RAMPs work and emphasize their clinical relevance by showing how their disruption can have fatal consequences.

“This study along with other research in this area point to the development of therapies that restore or otherwise alter the interactions of RAMPs with their partner receptors to treat a potentially wide range of diseases,” said study senior author Kathleen Caron, PhD, chair of the department of cell biology and physiology at the UNC School of Medicine.

The research was done in collaboration with Fuad Al Mutairi, MD, a clinical geneticist who was asked to consult on the case of a woman who experienced repeated pregnancy losses due to hydrops fetalis. Initial genetic testing failed to reveal any of the known mutations previously associated with hydrops fetalis. However, by using whole genome sequencing the team of researchers discovered that the unborn children had inherited two copies of a mutant form of the gene for CLR. The precise mutation, never described before, was the same in both copies of the gene, indicating that they had probably arisen from the same ancestor. In fact, additional genetic testing of extended family members helped to confirm the inheritance of the rare mutation.

The CLR receptor is activated by a signaling protein called adrenomedullin. Caron’s lab, in prior work, showed that adrenomedullin signaling is crucial for the normal development of the mouse lymphatic system – a network of special vessels that help manage the flow of lymph, a watery liquid that bathes the organs of the body, helps drain their molecular wastes, and helps protect them from microbes. Failure of lymphatic development is a prominent cause of hydrops fetalis. Caron discovered early in her career that mice lacking the gene for adrenomedullin develop hydrops fetalis and die before birth.

In this new study, Caron and colleagues engineered mice that lack both copies of the CLR gene in lymphatic vessels and found that the mice died in the womb from the same condition. 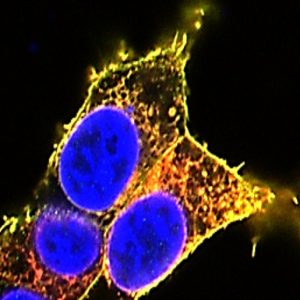 Caron and her team then developed molecular models of CLR and its interaction with its partner protein RAMP2. They showed how the CLR mutation disrupts this partnership, thereby disrupting normal adrenomedullin-CLR signaling.

The research is likely to have significance beyond the understanding of a rare hereditary mutation or even the CLR receptor. RAMP proteins haven’t been studied in depth but already they are known to partner with nearly a dozen receptors, several of which have obvious relevance to human disease. CLR itself is involved in migraine headaches. Other receptors include the calcitonin receptor, which is important for bone formation and function, and the glucagon receptor, which is relevant to diabetes.

Caron, who is also a member of the UNC Lineberger Comprehensive Cancer Center, expects that additional receptor partners of RAMPs will soon be discovered.

A recently FDA-approved migraine drug, Aimovig, targets the CLR-RAMP interface. In clinical trials, Aimovig had no more reported side effects than a placebo.

“From a drug development perspective, these receptor-RAMP interactions represent a vast and untapped resource for new drug development,” Caron said. Her lab already has many promising leads based on this ground-breaking research.

Funding for the study was provided by the National Institutes of Health, the American Heart Association, and the Biotechnology and Biological Sciences Research Council.