UNC School of Medicine
Skip to main content
UNC Health and UNC School of Medicine
Newsroom
The UNC Health logo falls under strict regulation. We ask that you please do not attempt to download, save, or otherwise use the logo without written consent from the UNC Health administration. Please contact our media team if you have any questions.
Home / News / Scientists Create Method to Map Vast Unknown Territory of Long Non-coding RNA

UNC School of Medicine researchers led by Mauro Calabrese, PhD, have developed a way to categorize mysterious RNA molecules by their likely function, a big first step toward quickening the discovery of their roles in human health and diseases, such as cancers.

UNC School of Medicine researchers led by Mauro Calabrese, PhD, have developed a way to categorize mysterious RNA molecules by their likely function, a big first step toward quickening the discovery of their roles in human health and diseases, such as cancers.

CHAPEL HILL, NC — Scientists from the University of North Carolina School of Medicine have developed a powerful method for exploring the properties of mysterious molecules called long non-coding RNAs (lncRNAs), some of which have big roles in cancer and other serious conditions. Until now, scientists have lacked the proper methods for identifying the functions of the tens of thousands of different lncRNAs produced in human cells. So far they’ve characterized only a few hundred of these molecules – a tiny part of the vast terra incognita they represent.

Published in Nature Genetics, UNC scientists discovered a hidden code that relates the molecular makeup of lncRNAs to what they actually do, and the researchers developed an algorithm to quickly categorize lncRNAs by their likely functions.

“Long non-coding RNAs are part of what you might call the ‘dark matter’ of the genome, and this tool we’ve developed should help us understand much better how they work in health and disease,” said study senior author Mauro Calabrese, PhD, assistant professor of pharmacology and member of the UNC Lineberger Comprehensive Cancer Center.

Genetic information in animals and plants is stored in DNA, and cells make use of that genetic information by transcribing the DNA into closely related molecules known as RNAs. Many RNAs go on to be translated into proteins. But scientists in recent decades have been forced to reckon with the fact that less than 2 percent of the genome is used that way. Most of the DNA is transcribed into RNAs that do not encode proteins. These are called non-coding RNAs, and the ones over 200 nucleotides in length are classified as long non-coding RNAs.

Many of these RNAs bind to proteins or other molecules to switch genes on or off, thus regulating cellular processes. One of the best known lncRNAs is called Xist, which is important for normal development in females. High levels of another called MALAT, have been linked to more aggressive and metastatic cancers. On the whole, biologists are sure that many lncRNAs have key regulatory roles whose disruption contributes to disease. So far, however, they have characterized the functions of only a small fraction of the many thousands of lncRNAs that are thought to exist in mammalian cells. 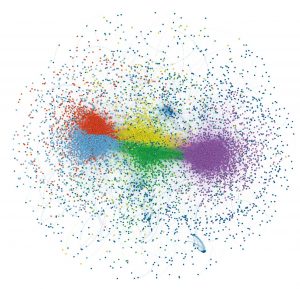 One reason biologists have been slow to understand what these molecules do is that a lncRNA’s function is not readily apparent when you study how it’s put together from its sequence of nucleotide building-blocks. Often two lncRNAs with similar functions appear to have very different sequences.

Calabrese and his team, including first author Jessime Kirk and Peter Mucha, PhD, professor of mathematics and applied physical sciences in the UNC College of Arts and Sciences, tried to decipher the otherwise obscure relationship between lncRNA sequence and function. They started with two key clues: Firstly, there is evidence that lncRNAs function mainly by binding to proteins. Secondly, RNAs connect to proteins using short sequences within their overall structures.

“We reasoned that the presence of protein-binding sequences in a lncRNA would be more important than their relative positioning within the lncRNA,” Calabrese said. “This notion ended up being true, and allowed us to succeed where more traditional approaches have failed.”

The team developed a computer-based method called SEEKR to find and compare protein-binding sequences they called “kmers” in lncRNAs, regardless of the kmers’ precise locations. The team found that about half of all human and mouse lncRNAs could be grouped into five different communities, based on similarities in their kmer content. The kmer-based approach also could help predict where lncRNAs are normally found within cells and to what kinds of protein they bind.

“We can now take sequence information from a well-studied lncRNA, and use it to discover lncRNAs that may be functioning through a related mechanism. In a way, it’s like being able to finally understand the different scripts in the Rosetta Stone.” Calabrese said.

“In terms of kmer content, subsets of human lncRNAs may be more similar to lncRNAs from evolutionarily distant species than they are to other human lncRNAs,” Calabrese said. “This supports the idea that groups of lncRNAs have similar functions in different organisms despite lacking obvious linear sequence similarity.”

In the ultimate test of their concept, the scientists synthesized completely artificial lncRNAs, designing them to include kmers found in Xist, while making sure that the molecules’ overall sequences were unlike those of any known lncRNA. They applied their SEEKR algorithm to these artificial lncRNAs and found that those with the highest predicted functional similarity to Xist had the highest actual functional similarity in a simple test-tube test of Xist-like activity.

Calabrese and his colleagues now hope to use their kmer-based approach to guide the discovery and study of lncRNAs important in diseases such as cancer. They also expect to refine their methods to better predict lncRNAs’ functions from their sequence information.

“Our genomes produce so many lncRNAs, and now we have a much better idea of how to look at the sequences of these molecules to predict which ones are doing important things in our cells,” Calabrese said.

Funding for the study was provided by the National Institutes of Health (GM121806, GM105785, UL1TR002489, R35 GM122532), the March of Dimes Foundation, the Eshelman Institute for Innovation, the UNC Lineberger Comprehensive Cancer Center, the UNC Department of Pharmacology, and the James S. McDonnell Foundation 21st Century Science Initiative.