UNC School of Medicine
Skip to main content
UNC Health and UNC School of Medicine
Newsroom
The UNC Health logo falls under strict regulation. We ask that you please do not attempt to download, save, or otherwise use the logo without written consent from the UNC Health administration. Please contact our media team if you have any questions.
Home / Migrated / Sancar’s Replica Nobel Medal Now on Display at Wilson Library

Aziz Sancar, MD, PhD, winner of the 2015 Nobel Prize in Chemistry, donated one of three gold-plated medals as permanent gift to the university and it is now on display in the numismatics exhibit.

Aziz Sancar, MD, PhD, the winner of the 2015 Nobel Prize in Chemistry, gifted one of three replicas of the Nobel Prize medal to the University of North Carolina at Chapel Hill. It is now on display in the newly installed numismatics exhibit, which opened Monday at the Wilson Special Collections Library. Sancar donated this gold-plated medal as permanent gift to the university with the intention to motivate students to pursue research at the highest level.

This medal was first displayed at the Davis Library in April 2016 along with the 2007 Nobel Prize in Medicine or Physiology medal, which Oliver Smithies, DPhil, earned for his pioneering work on gene targeting and knockout mice.

Sancar, the Sarah Graham Kenan Professor of Biochemistry and Biophysics with a joint appointment in the biology department, won the 2015 Nobel Prize in Chemistry for his work mapping the cellular mechanisms that underlie DNA repair, which occurs in all of us every day in response to damage caused by outside forces, such as ultraviolet radiation and other environmental factors.

At the Davis Library event in 2016, Sancar said, “I am grateful to UNC. I applied to 50 universities, and this was the only place that gave me a job.” That job offer was thanks in large part to Mary Ellen Jones, PhD, then head of the biochemistry department and the first female department chair at UNC-Chapel Hill. 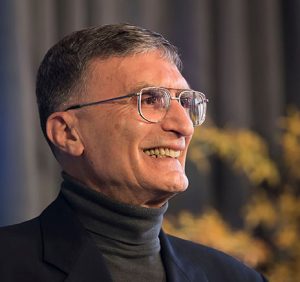 Sancar, a member of the UNC Lineberger Comprehensive Cancer Center, received the original gold Nobel medal at the Nobel Prize Ceremony in Stockholm, Sweden in December of 2015, and subsequently donated it to a museum in Ankara, Turkey part of a large complex surrounding the mausoleum of Mustafa Kemal Ataturk, a national shrine that attracts more than 10 million visitors a year.

Sancar purchased three replica gold-plated medals, the maximum that Nobel laureates can purchase. Two are also in Turkey. He donated one medal to the medical school at Istanbul University he attended and a second medal to the village of Savur, where Sancar grew up. He did this because one of the top research universities in Turkey established a full scholarship bearing his name to a female student from Savur.

“That one really makes me happy,” Sancar said.