Abbey and Heath Sykes found out that their baby, while in utero, was suffering from Sacrococcygeal Teratoma (SCT), a rare fetal tumor. They were committed to doing everything they could to give their unborn child a fighting chance at life. Thanks to the multi-specialty team at UNC including Maternal-Fetal Medicine, Neonatology, the NICU team, and Pediatric Surgery, they delivered a healthy baby girl.

In the 18th week of Abbey Sykes’ pregnancy, she and her husband Heath sat in a dark room and watched their unborn baby on the ultrasound screen. They were filled with excitement and joy, waiting to hear the sex of their child, their 18-month-old son Henry in the waiting room with a family friend waiting to hear if he would be welcoming a baby sister or brother. As the parents saw their baby take shape on the screen, Abbey, a pharmacist, noticed something abnormal as her child’s back and spinal column were revealed. She asked the tech about what appeared to be a bubble on the baby’s spine and was told that they would have to investigate further. Her heart began to pound and worry formed a knot in her stomach as they waited for the doctor to review the images.

The doctor arrived and confirmed that something did not look quite right. However, they did not know what it was since it was still so early in the pregnancy. There was talk of Spina Bifida, among other possibilities, but it was just too soon to know for sure.

“We did find out we were having a little girl and left feeling like whatever the circumstances or diagnosis would be, we would get through this and our baby girl would be okay,” says Abbey, “we’d be able to get through it together, with our faith and family. We had our friend there with us to watch Henry, and she wanted to be the first to know if it was a girl or boy. She and her husband have been trying to have a baby; they are struggling with infertility. It helped put it into perspective for me. Just because there is something not quite right in utero, these great doctors can give your child a fighting chance. We’re strong and dedicated to doing everything we could to give our baby girl the best chance at life.”

The family returned a week later for another ultrasound. At that time, the doctors found that the growth had increased in size, suggesting a different diagnosis. The discussion then turned toward the possibility of Sacrococcygeal Teratoma (SCT), which is an unusual tumor (usually benign but can sometimes be malignant) that is located at the base of the tailbone. According to the American Pediatric Surgical Association, it’s the most common tumor found in newborns, occurring in 1 out of every 30,000-70,000 live births. Ultrasound is the most commonly used tool to diagnose and characterize SCTs, however fetal MRI is often used in complex cases to help plan for care after birth.

Most pregnancies with fetal SCT progress well to delivery, and most children will be expected to have few long term complications following successful removal of the tumor. Some SCTs can have large blood vessels from the baby’s heart to the tumor, putting these babies at risk for developing strain on their heart that could be life threatening. Heart strain and failure in the baby can also be ‘mirrored’ in the mother, also affecting her heart function and cause her to have severe high blood pressure. SCTs larger than 10 cm, rapidly growing, and having high blood flow are most at risk for complications. Maternal fetal medicine specialists closely follow the size of the tumor and blood flow during pregnancy, including evaluating the baby’s heart with ultrasound. 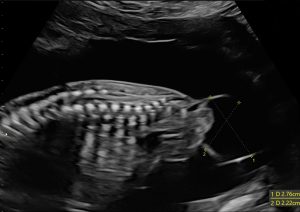 At each appointment the ultrasound tech would light up the screen with blue and red colors, tracking the tumor’s blood flow. Every time the tech would share the good news that blood flow was minimal in the tumor and the baby was otherwise developing normally.

“I was trying just to make it through each day and stay mentally healthy because I knew worry would steal my joy,” says Abbey. “Many times with SCT, the growth gets so big it pulls on the baby’s heart, and they can be born really early, so initially, they were shooting for us making it to 28 weeks, then 30 weeks, and 32 and we made it to 36 weeks before I started feeling miserable. So we got really far, and her heart stayed strong the whole time, which was reassuring.”

For families affected by congenital anomalies or facing high risk pregnancies, they are supported by a CMIH care coordinator who guides them through the pregnancy and the early part of childhood. “After you’re diagnosed prenatally,” says Abbey, “and the baby is not going to be a standard delivery, they plug you in with somebody. We had a care coordinator throughout the process, Lisa Wellborn, who was wonderful, she coordinated everything for us. She was the one that would set up our pediatric surgery and initial meet and greet appointments with all the doctors who were going to be involved during my delivery and afterward during the surgery to remove the tumor.”

During their pre-operative appointment in September, Abbey and Heath toured the Neonatal Intensive Care Unit (NICU). This gave them the opportunity to prepare mentally to be separated from their newborn. For parents separated from their babies, unable to hold them due to complications, the NICU provides families activities such as making onesie to hang up above the baby or a banner for their little bed. In addition, Abbey and Heath then met with Dr. Andrea Hayes-Jordan, pediatric surgeon and Surgeon in Chief of the UNC Children’s Hospital and they discussed what the surgical steps were that their newborn would be undergoing.

At 36 weeks and six days, Ruth Sykes was born via cesarean delivery on Thursday, October 11, at noon. She weighed 8 pounds, 4 ounces and 19.5 inches. The delivery was performed by Dr. Robert Strauss, UNC Maternal Fetal Medicine. Ruth’s tumor was so large that he had to perform a ‘classical’ type of cesarean, meaning he had to perform a more complicated ‘up and down’ incision in the uterus, or womb, to have enough space to safely delivery the baby with the tumor.

The delivery room was crowded with doctors from across the hospital. Maternal Fetal Medicine focused on Abbey and getting her safely through the delivery. The neonatologist, Dr. Sigal Peter-Wohl, and her team took the baby immediately to check her vitals and give her oxygen to increase her oxygen saturation levels. Abbey was able to see her daughter briefly before Ruth was transferred to the NICU. Heath went with Ruth, watching as they got her IV started in her little giraffe bed, a light shining on her to keep her warm. 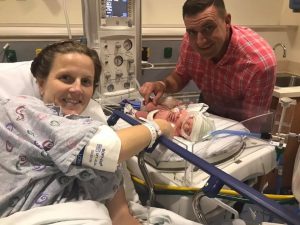 “After my surgery, my recovery nurse arranged for us to push my big hospital bed through the NICU so I could see my baby girl. They called down to the NICU, letting them know they were going to push this mom and her big hospital bed through the NICU and to make space. That was really nice that they did that so that I could see Ruth before going to my room.”

On Thursday night Abbey and Heath met Dr. Michael Phillips, a Pediatric Surgeon, for the first time. “We were expecting Dr. Hayes-Jordan to come in to speak to us about the surgery,” says Heath. “She was called out of town unexpectedly, and Dr. Phillips came in, and I remember thinking, ‘who’s this guy?’ In the end, I’m glad he was our doctor; he’s awesome.”

The original plan was to deliver Ruth on Thursday and for her surgery to remove the tumor to take place on Friday, thus allowing 24 hours for her heart and body to adjust from being on mom’s circulation to her own circulation. Instead, Dr. Phillips explained that the surgery would happen on Monday and that on Friday, they would be doing an MRI to get a better idea of the formation and extension of the tumor.

“It was jarring to see a different face, saying that they were going to wait until Monday potentially and I was going to have to go 72 hours without holding my newborn. To watch her just lay there in the NICU for the whole weekend was rough to get adjusted to a first. Looking back, it ended up being a blessing because Ruth was able to adjust to life outside of the womb and get a little stronger. The nurses in the NICU took exceptional care of her, and they have a little angel eye camera that allowed us to watch her on our phone whenever we wanted, which helped reassure us.”

“After Ruth was born, she did really well,” says Dr. Phillips, “so we had the luxury to wait to do the surgery until the following Monday. We talked to the family several times over the weekend, offered reassurance as well as more information about the surgery. Even knowing this was the plan prenatally, at the time, you could tell everyone was anxious, mom, dad, grandparents. I tried to provide consistent communication with them, so they knew what to expect.”

The MRI results came back with very good news. Dr. Phillips confirmed that although the tumor was bigger than he would have preferred, (almost 1/3 of Ruth’s body weight), overall there were no internal components, and so he would not have to do any reconstruction of her bowels.

“Dr. Phillips was really good at explaining everything so we could understand,” says Heath. “He kept us in the loop about everything. I never had to call him, (to say) ‘hey what’s going on.’ He was always there letting us know what was going to happen beforehand.”

Ruth was taken back to the OR on Monday at 9am for an estimated surgery time of 5-6 hours. At 11 am the Sykes were pleasantly surprised to receive a call from Dr. Phillips. He informed them that everything went extremely well, the tumor was removed, and Ruth was in recovery. The tumor weighed about 2 pounds, so Ruth now actually weighed 5 pounds, 4 ounces. Later that day Abbey and Heath were able to hold their baby girl for the first time. On Friday the family got to go home.

The day they were set to leave, bags all packed, Dr. Phillips called to give them the results of the tumor biopsy. It was benign. “The biggest risk the family now faces is a recurrence, says Dr. Phillips, “which is small but it can happen. We will continue to see Ruth so we can make sure we don’t see any evidence of that.”

The family continues to come back for scheduled appointments to check on Ruth as she grows and develops. She is a growing infant, gaining weight and getting bigger every day. “We are so thankful to the nurses and doctors who helped us throughout. A friend of ours is a nurse in the PICU, and she came to visit us before Ruth’s surgery. I told her that Ruth’s surgery plans had changed and she told us to trust the team, they’re all so great. And she was right, they were all wonderful, and we trusted them completely.”