The UNC School of Medicine’s Chapter of the Student National Medical Association was awarded SNMA Chapter of the Year for their service to students of all ages and the wider North Carolina community.

“That conference was such a great experience for me,” said Bryan, a first-year student at the School of Medicine. “I got to learn so much, including about the process of medical school.” Bryan and Gabrielle Nortey are co-presidents of the UNC SNMA chapter. Along with vice-president Ayesha Ibrahim and a dynamic executive board and committed group of organization members, these young women helped lead UNC SNMA throughout the past academic year to earn Chapter of the Year honors.

Mentorship and role modeling are critical to the development of any medical professional, but particularly those from underrepresented backgrounds in medicine. As a profession, medicine is legacy-dominated. That face, coupled with high costs of education and training, leads to many medical professionals coming from the highest socioeconomic levels. Most health care professionals don’t wake up one morning with a magical idea they want to help heal the sick or develop new treatments. Many have a family member or mentor they looked to somewhere along the way – even if was later in life – someone they saw living the life of a dedicated health care worker, and they said to themselves, “That’s what I want to do.”

Since its inception, the SNMA has worked to create pipeline programs to put minority and underrepresented medical professionals and students in front of school-age children and college students in underserved communities with the goal of increasing the number of health care professionals from diverse backgrounds and improving outcomes for underserved populations. Data shows that students from underserved communities are more likely to go back and practice in those communities and serve underserved populations. The UNC chapter of SNMA was established in the early 1980s and has proven vital to helping achieve that mission in North Carolina.

With over 100 members across the four-year classes, SNMA is led by current first-year students balancing the demands of the professional school curriculum with the needs of the community. UNC SNMA earned chapter of the year through a year of robust community engagement and service, and strong leadership and initiatives. 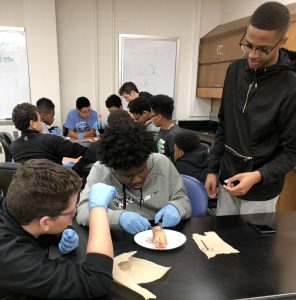 Through the annual Pipeline Programs of HPREP, MSTEP, and YSEP – a Saturday STEM and health professions focused curriculum – UNC SNMA hosts 75 underrepresented elementary, middle and high school students from Orange, Duke, Wake, Alamance, and Chatham counties over five Saturdays each fall and spring. And UNC SMNA members guide students through activities like cardiac ultrasound, suturing pigs’ feet and learning about asthma and bronchodilators. The SNMA members also expose students to other health professions with visits to the UNC Eshelman School of Pharmacy and the UNC Adams School of Dentistry to learn about drug development and careers in oral health.

“The pipeline programming is one of the many ways we support the SNMA national mission,” Ibrahim said. “This was the largest cohort of students we’ve ever had, and at the end we had a graduation ceremony for them. The parents loved it.” In addition to hosting the 75 pipeline students each year, SNMA is also instrumental in helping the Office of Special Programs host more than 200 students from K-12 and colleges during visits to UNC SOM campus each year. Through STEM programming or panels discussing their journey to and through medical school, SNMA students are quite often the first ambassadors of medical school many students see.

That is far from all the UNC SNMA chapter accomplishes. Once a week all year long, no matter their course load or work schedule, SNMA members from Chapel Hill travel to Eno Valley Elementary School in Durham, North Carolina, to volunteer with the after-school Men of Honor and Young Ladies of Excellence programs. SNMA members who are part of the Minority Women in Medicine (MWM) and Minority Men in Medicine (MMM) groups lead STEM, life skills, and academic success lessons and interact with elementary students to not only be an inspiration but provide hope as living role models of what the students can aspire to be.

“We get to watch these kids grow throughout the year,” Bryan said. “They get exposed to medical science and they appreciate it, they see it as fun. They partake in ear and eye exams. This experience provides them the opportunity to see that there are physicians who look like them. Our hope is that this helps increase the number of underrepresented students who will become doctors.”

“This is really when I got to embrace perspectives of African American female physicians,” Bryan said. “Just listening to them talk about their stories and struggles. It was great to have that moment to share with people who look like me.”

This year, the UNC SNMA chapter collaborated with the Whitehead Medical Society to raise $1,200 for essentials to support low-income families through the Share Your Christmas Initiative. The SNMA also organized the annual Zollicoffer banquet and silent auction, during which they raised more than $3,000 for the Hive House in Bertie County, North Carolina, this past winter. The Hive House is a safe haven for community youth, as well as an educational and professional development hub for the underserved in Bertie.

“The Office of Special Programs (OSP) at the School of Medicine dedicates a Saturday each semester to partner or volunteer with the Hive House because of the tremendous work they do in the community,” Nortey said. Last October, SNMA members spent a day preparing the Hive House for its re-opening following remodeling. From unloading an 18-wheeler full of furniture and supplies, to scrubbing pots, pans, and floors, the members of SNMA walked the walk of the mission nationally and at UNC. As the annual Zollicoffer banquet approached, there was unanimous consensus the silent auction proceeds should go to benefit the work of Vivian Saunders, director of Hive House. “When we surprised her with the money we helped raise, she was brought to tears she was so emotional,” Nortey said.

UNC SNMA also partners annually with OSP to host the Underrepresented Second Look Banquet, where accepted underrepresented students can mingle with current UNC medical students at a dinner at the Carolina Club. SNMA members are also part of the formal recruitment and interview processes, and SNMA members make themselves available for informal interactions and interviews with prospective students throughout the interview cycle.

“This was a huge piece of what brought us here,” Nortey said. “It was second look weekend and all the good interactions with diverse students that made it clear UNC is the place for me.”

Ibrahim said, “My interactions with SNMA students here were crucial before I decided to come to UNC. I had no relation to North Carolina before that. Interviews with students and great vibes at the banquet were essential to me. And I wouldn’t have come here if UNC didn’t have a robust SNMA chapter.”

The energy UNC SOM SNMA members bring to their chapter is evident in each service project and culminates in a palpable enthusiasm when they talk about the opportunity to attend AMEC and further develop their leadership and professional skills.

“Some schools with SNMA chapters bring a few students, usually around 10 or a little less,” Bryan said. “But UNC is just so supportive of our mission that they gave us administrative leave to attend the conference. They understand the importance of this conference.” Forty-five UNC SOM SNMA members attended 2019 AMEC in Philadelphia in April, one of the largest cohorts represented. All students received some funding to attend from the Office of Special Programs and UNC School of Medicine.

The UNC Office of Medical Education and the Office of Inclusive Excellence also hosted a mixer during the conference to encourage networking among UNC residents, students, and MED alums from other medical schools. The connections and bonds UNC SNMA members formed was fully evident with over 100 current, former, and potential students present for the mixer.

“We came back feeling even more UNC pride because it just means so much to be supported,” Ibrahim said. “The school understands the importance of SNMA’s mission, and that understanding is just so important to us.”