UNC School of Medicine
Skip to main content
UNC Health and UNC School of Medicine
Newsroom
The UNC Health logo falls under strict regulation. We ask that you please do not attempt to download, save, or otherwise use the logo without written consent from the UNC Health administration. Please contact our media team if you have any questions.
Home / Migrated / Scientists Find Powerful Potential Weapon to Overcome Antibiotic Resistance

CHAPEL HILL, NC – Staphylococcus aureus bacteria are a major cause of serious infections that often persist despite antibiotic treatment, but scientists at the UNC School of Medicine have now discovered a way to make these bacteria much more susceptible to some common antibiotics.

The scientists, in a study published in Cell Chemical Biology, found that adding molecules called rhamnolipids can make aminoglycoside antibiotics, such as tobramycin, hundreds of times more potent against S. aureus – including the strains that are otherwise very hard to kill. The rhamnolipids effectively loosen up the outer membranes of S. aureus cells so that aminoglycoside molecules can get into them more easily.

“There’s a great need for new ways to kill bacteria that tolerate or resist standard antibiotics, and to that end we found that altering membrane permeability to induce aminoglycoside uptake is an extremely effective strategy against S. aureus,” said study senior author Brian Conlon, PhD, an assistant professor in the department of microbiology and immunology at the UNC School of Medicine.

The U.S. Centers for Disease Control has estimated that in 2017 there were more than 119,000 cases of serious bloodstream Staph infections in the United States, of which more than 20,000 were fatal.

Standard treatments for many strains of the S. aureus do not kill the bacteria, either because the bacteria have genetically acquired specific antibiotic resistance or because they grow in the body in a way that makes them inherently less vulnerable. For example, S. aureus can adapt its metabolism to survive in low-oxygen zones in abscesses or in the mucus-filled lungs of people with cystic fibrosis. In these environments, the bacterial outer wall or membrane becomes relatively impermeable to aminoglycosides, such as tobramycin.

Conlon and colleagues, including first author Lauren Radlinski, a PhD candidate in the Conlon laboratory, found in a 2017 study that rhamnolipids greatly enhance tobramycin’s potency against standard test strains of S. aureus. Rhamnolipids are small molecules produced by another bacterial species, Pseudomonas aeruginosa, and are thought to be one of P. aeruginosa’s natural weapons against other bacteria in the wild. At high doses they make holes in rival bacteria’s cell membranes. The UNC researchers found that rhamnolipids greatly boost the uptake of tobramycin molecules, even at low doses where they have no independent anti-bacterial effect.

In the new study, Conlon, Radlinski and colleagues tested rhamnolipid-tobramycin combinations against S. aureus populations that are particularly hard to kill in ordinary clinical practice. The researchers found that rhamnolipids boost tobramycin’s potency against:

• and “persister” forms of S. aureus that normally have reduced susceptibility to antibiotics because they grow so slowly. 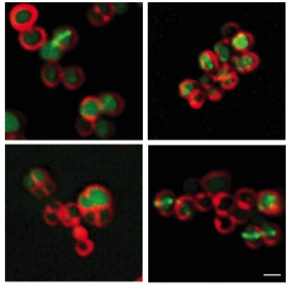 Radlinski said, “Tobramycin doses that normally would have little or no effect on these S. aureus populations quickly killed them when combined with rhamnolipids.”

Conlon, Radlinski, and colleagues determined that rhamnolipids even at low doses alter the S. aureus membrane in a way that makes it much more permeable to aminoglycosides. Each antibiotic in this family that they tested – including tobramycin, gentamicin, amikacin, neomycin, and kanamycin – had its potency enhanced. The experiments showed, moreover, that this potency-boosting strategy is effective not just against S. aureus but several other bacterial species, including Clostridioides difficile (C-diff), which is a major cause of serious, often-fatal diarrheal illness among the elderly and patients in hospitals.

Rhamnolipids come in many variants, and the scientists now hope to determine if there is an optimal variant that works powerfully against other bacteria while having little or no toxic effect on human cells. The team also plans to study other microbe-vs.-microbe weapons to find new ways to enhance the potency of existing antibiotics.

“There’s a huge number of bacterial interspecies interactions that could be influencing how well our antibiotics work,” Radlinski said. “We aim to find them with the ultimate goal of improving the efficacy of current therapeutics and slowing the rise of antibiotic resistance.”

Other authors were Sarah Rowe-Conlon, PhD, Alec D. Wilkinson, and Rennica Huang of UNC-Chapel Hill; and Robert Brzozowski and Prahathees Eswara, PhD, of the University of South Florida.