UNC School of Medicine
Skip to main content
UNC Health and UNC School of Medicine
Newsroom
The UNC Health logo falls under strict regulation. We ask that you please do not attempt to download, save, or otherwise use the logo without written consent from the UNC Health administration. Please contact our media team if you have any questions.
Home / News / Scientists Identify Underlying Molecular Mechanisms of Alexander Disease

CHAPEL HILL, NC – November 21, 2019 – Scientists have known that genetic mutations leading to the production of a defective protein called GFAP cause Alexander disease (AxD), a debilitating neurodegenerative condition that can present during infancy, adolescence, or adulthood. Many people with the rare condition die within the first few years, but some survive for several decades. Now, UNC School of Medicine researchers are learning about the differences in the underlying biology of patients with severe and milder forms of AxD. Led by Natasha Snider, PhD, assistant professor of cell biology, an international group of scientists has discovered that the mutant form of GFAP undergoes different chemical modifications, depending on time of onset of symptoms.

Published in the online journal eLife, this research marks the first time scientists have been able to model very specific chemical changes to GFAP that occur inside the AxD brain using an in vitro system derived from AxD patient cells. This is allowing Snider and colleagues to probe the details of how GFAP misfolding and accumulation alters cellular mechanics to lead to disease progression and death.

“We are now further investigating the enzymes responsible for the key reactions inside brain cells that lead to AxD,” Snider said. “We believe our research findings may open the door to new drug development opportunities for researchers and ultimately new kinds of therapies for people with this terrible disease.”

Most cases of Alexander disease occur during infancy and involve myelin destruction. Babies with AxD have enlarged brains, and they experience seizures, stiffness in the arms and legs, and developmental delay. Sometimes, though, symptoms do not occur until later in childhood or even in adulthood, and in the absence of leukodystrophy, when symptoms include speech abnormalities, swallowing difficulties, seizures, and poor coordination. Over time, abnormal protein deposits containing GFAP known as Rosenthal fibers accumulate in specialized cells called astrocytes, which support and nourish other cells in the brain and spinal cord. 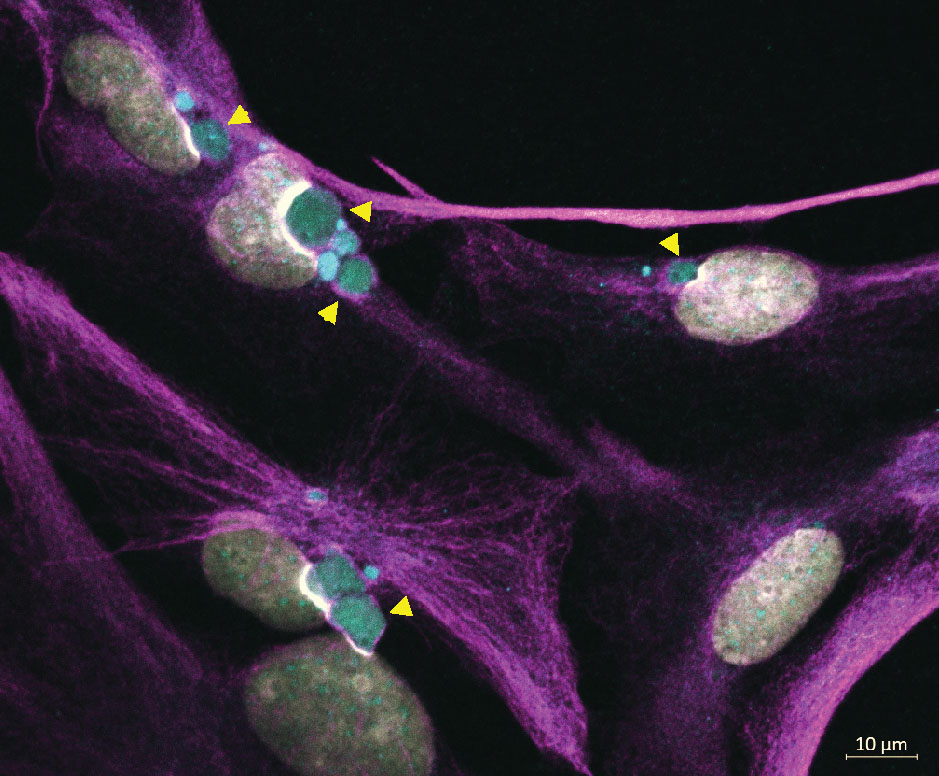 Since 2011, Snider has been studying the mechanisms of GFAP accumulation with the hope of finding an existing drug or compound to help AxD patients and developing insights needed to create a new kind of therapy. GFAP forms intermediate filaments – structures that shape the ‘skeleton’ of astrocytes. Toxic accumulation of GFAP that is incapable of forming a proper structure leads to astrocyte dysfunction, which harms surrounding neuronal and non-neuronal cells in AxD patients. Problems of GFAP accumulation in astrocytes have also been found in other diseases, such as giant axonal neuropathy and astrocytoma tumors.

For the eLife study, Snider and colleagues combined mass spectrometry-based proteomic analysis of AxD and non-AxD human brain tissue with induced pluripotent stem cells and CRISPR/Cas9 gene editing technology to connect the relevant disease phenotypes to the underlying cell biology. This work illuminated key mechanisms involved in GFAP misfolding and revealed new markers of disease severity. For the first time, they made a clear molecular distinction between AxD children who die young and people who live for several decades.

Using the cell line model created by Rachel Battaglia, a graduate student in the Snider lab, in collaboration with Adriana Beltran, PhD, assistant professor of pharmacology at UNC, the team observed specific types of GFAP aggregates sequestered outside the misshapen membranes of cell nuclei. “This phenomenon had been observed previously in astrocytes of AxD patients,” Snider said. “But ours is the first demonstration of this phenomenon in a model cell line in the lab to help us probe how exactly GFAP accumulation affects other cellular organelles to cause disease.” These findings also relate to published literature on other debilitating and fatal human diseases associated with defects in intermediate filament proteins that have similar functions to GFAP.

The next step is to use this new knowledge to see if these molecular markers of GFAP aggregation can be leveraged for the creation of new treatments to help people with Alexander Disease.

Researchers received funding from the National Institutes of Health, the University of North Carolina Department of Cell Biology and Physiology, the National Science Foundation, the United Leukodystrophy Foundation, and Elise’s Corner Fund.