UNC School of Medicine
Skip to main content
UNC Health and UNC School of Medicine
Newsroom
The UNC Health logo falls under strict regulation. We ask that you please do not attempt to download, save, or otherwise use the logo without written consent from the UNC Health administration. Please contact our media team if you have any questions.
Home / Announcements / UNC Children’s Heart Program Fights for Infant’s Life … Culminating in Successful Heart Transplant

Diagnosed with a congenital heart condition while still in utero, Suzi Leahy’s unborn son, Jett, was given “little chance of survival,” yet he beat the odds thanks to the life-saving care of the N.C. Pediatric Heart Center at UNC Children’s Hospital in Chapel Hill, NC.

Jett celebrated his first birthday in September 2019, but it was a very tough road from diagnosis to birthday celebration.

“Little chance of survival.” Those were the devastating words delivered to Suzi Leahy soon after a fetal echocardiogram was performed at her 24-week appointment. Suzi’s husband, Anthony, had left two weeks prior for Iraq, a nine-month deployment with his Army unit.

At that appointment, she was informed that her unborn son had been diagnosed with an unbalanced atrioventricular septal defect (AVSD), a congenital heart defect (CHD) in which there are holes in the wall separating the right atrium and the left atrium of the heart.

Rather than having a mitral valve on the left side that separates the upper and lower chambers and a tricuspid valve that separates the upper and lower chambers on the right side, Jett had a common AV valve, atrioventricular valve. Not only that, but the AV valve was shifted over, so blood was not getting into one of the pumping chambers, causing it to be underdeveloped.

The rest of the pregnancy was a whirlwind of appointments for the Leahy family that included UNC Maternal Fetal Medicine, UNC Cardiology, and UNC Congenital Heart Surgery Teams. In the 37th week of the pregnancy, Suzi and Anthony met with Dr. Mahesh Sharma, Chief of Congenital Cardiac Surgery and Co-Director of the NC Children’s Heart Center.

At the time of their consult, it was unclear on Jett’s prenatal ultrasound whether he would have two adequate ventricles or pumping chambers. The options Dr. Sharma laid out were to repair his AV canal defect or proceed with a single ventricle strategy if one ventricle was too small.

Jett is Born & the Fight Begins

Jett was born at 39 weeks in September 2018. A week after birth, he stopped nursing, and Suzi could tell he was having a hard time breathing.

Thanksgiving night, Suzi noticed Jett was having a difficult time, throwing up after every feed, breathing hard, sweating and struggling overall. He was admitted to UNC Hospitals through the ER and thus began the long fight to save Jett’s life. He was admitted with severe heart failure and multiple viruses infecting his lungs.

Without the wall separating the chambers of the heart, blood was flowing into Jett’s lungs, making it hard for him to breathe. He was placed on a ventilator upon admission. The risk of open heart surgery at this point was too high. In late December, Dr. Sharma and his team treated Jett with a pulmonary artery band to ease the severity of the disease and to limit blood to his lung so the pneumonia could improve. The band is designed to restrict the amount of blood going into the lungs.

The operation to place the band included unforeseen challenges. Dr. Sharma called on his Co-Director of the NC Pediatric Heart Center at UNC Children’s Hospital and Chief of the Division of Pediatric Cardiology, Dr. Tim Hoffman, to meet with Suzi and the family.

During surgery, Jett’s heart did not tolerate the PA banding. For reasons that are not completely clear, the stress the band placed on the heart caused it to develop an arrhythmia that stopped his heart. He was saved by being placed on extracorporeal membrane oxygenation (ECMO), a treatment that uses a pump to circulate blood through an artificial lung back into the bloodstream. This system provided heart-lung bypass support outside of Jett’s body.

“It was a challenging way to meet someone,” shares Dr. Hoffman. “The reality is there is no way to put anyone at ease in a situation like that. Instead, my goal was to be truthful and transparent with the family. I sat there with them and concentrated on what their needs were. At that point you have to have empathy, humility and be a person for them and not necessarily the physician.”

Jett’s heart recovered after the surgery, but his heart failure persisted, making his heart too weak for corrective surgery. Therefore, the team decided to pursue heart transplantation, and Jett was placed on the transplant wait list.

“I knew a transplant was in our future, but I didn’t expect it to be so soon,” Suzi shares. Jett was only three months old. We waited for five weeks. The closer we got to the transplant, the worse his condition became.”

A Bad Night for Jett

“They called me at midnight March 15th and told me I needed to come in immediately, something wasn’t right,” Suzi recalls. “When I rushed to his room, the doors were wide open; there were so many people there, a code cart available. I whispered to him, ‘You’re going to be ok. You’re a fighter. Don’t give up.’”

“His heart rate would fluctuate from the low 70s up to 120s,” Suzi explains. ”When his heart rate dropped to the 30s, they started chest compressions in front of me. The doctors and nurse were able to get him stabilized, but I knew he didn’t have long; he needed a heart.”

A Donor Heart is Identified

A week after Jett’s second cardiac arrest, Dr. Sharma called Suzi. “We were looking into an offer, but it was complicated,” explains Dr. Sharma. “Jett was O+ blood type, but the blood type of the donor was A+ so they were an ABO-incompatible match, which I told her could come with some complications. But, because Jett was less than a year old, his immune system hadn’t fully developed. That could work in our favor in helping suppress his immune system enough so that it would accept the donor heart. I asked if she wanted to move forward, and she was emphatic that this was the path they wanted to take.”

As few as 500-600 pediatric heart transplantation procedures are performed worldwide each year, limited by the number of heart transplants in infants is the shortage of suitable donor organs. Infants often present in poor clinical condition, and waiting list mortality is higher than in adults, with instances of between 23% and 50% reported in some studies.

Transplant Surgery is a Go 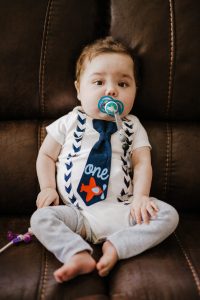 Doctors performed tests to see if Jett’s blood would reject the donor heart and found that his blood had little to no reaction. The surgery was a go. Although the entire process was lengthy, the heart was implanted in less than one hour. It was the first ABO-incompatible heart transplant in UNC’s history. Performing heart transplants requires an expert team of doctors across multiple disciplines, but performing an ABO-incompatible transplant requires another level of care due to the complexities of the case.

“I paced outside the Pediatric Intensive Care Unit doors, waiting to see my baby boy,” recounts Suzi. “Dr. Sharma greeted me first. He looked exhausted but extremely relieved. He came up to me, and I remember how he looked, his facial expressions, and my son’s blood still on his scrubs.

“He opened his arms and hugged me tight and said, ‘We did it. Your son is doing amazing!’

“I was so relieved. I waited by those doors and saw the team turn the corner with Jett, and they were all smiling. I looked down at him in his little gurney. When he went back for surgery, his skin was a blueish/purple color that was normal for him, and now I could see a healthy pink glow. I kissed his little hand and fell to my knees and cried, thanking God for saving him.”

Throughout the healing process, Jett faced challenges. Two weeks after his transplant, Jett was diagnosed with a critical brain bleed in the cavity surrounding his brain. This required the assistance of pediatric neurosurgeon, Dr. Carolyn Quinsey, who successfully placed a drain to help divert fluid from around Jett’s brain and monitor pressure inside his skull. Doctors shared in the family’s triumphs with each milestone achieved and worked hard at each new setback. Slowly, Jett recovered.

“Jett and his family became part of our family,” explains Dr. Hoffman. “Transplant is never successful unless it is a complete team approach between the providers and family. When there are strong bonds between providers and family, this leads to the best outcomes possible.

After 264 days in the hospital, Jett was discharged. He was sent home to be with his family and continues his recovery. Jett turned one in September 2019 and has been doing incredible since his discharge. While he still faces some medical challenges, Jett smiles and laughs all day. He is eating regularly, having started on baby foods, and is meeting his growth milestones. Not only did Jett survive, but he is learning to thrive.

“The entire team at UNC is incredible,” gushes Suzi. “Everyone from the PICU nurses who are like family to us, to the cardiology team, to all the people who supported us in a million ways during our stay at the Children’s hospital. I wholly recommend UNC Children’s hospital, because it’s truly a remarkable place.”