UNC School of Medicine
Skip to main content
UNC Health and UNC School of Medicine
Newsroom
The UNC Health logo falls under strict regulation. We ask that you please do not attempt to download, save, or otherwise use the logo without written consent from the UNC Health administration. Please contact our media team if you have any questions.
Home / Migrated / The Ultimate Telemedicine: UNC Expert Helps Treat Astronaut’s Blood Clot During NASA Mission

CHAPEL HILL, NC – “My first reaction when NASA reached out to me was to ask if I could visit the International Space Station (ISS) to examine the patient myself,” said Stephan Moll, MD, UNC School of Medicine blood clot expert and long-time NASA enthusiast. “NASA told me they couldn’t get me up to space quickly enough, so I proceeded with the evaluation and treatment process from here in Chapel Hill.”

Moll was the only non-NASA physician NASA consulted when it was discovered that an astronaut aboard the ISS had a deep vein thrombosis (DVT) – or blood clot – in the jugular vein of their neck. The astronaut’s identity is being kept anonymous for privacy reasons, so identifying information such as when this event happened is being omitted from the case study. We do know that the astronaut was two months into a six-month mission on the ISS when the DVT was discovered.

This was the first time a blood clot had been found in an astronaut in space, so there was no established method of treatment for DVT in zero gravity. Moll, a member of the UNC Blood Research Center, was called upon for his vast knowledge and treatment experience of DVT on Earth.

“Normally the protocol for treating a patient with DVT would be to start them on blood thinners for at least three months to prevent the clot from getting bigger and to lessen the harm it could cause if it moved to a different part of the body such as the lungs,” Moll said. “There is some risk when taking blood thinners that if an injury occurs, it could cause internal bleeding that is difficult to stop. In either case, emergency medical attention could be needed. Knowing there are no emergency rooms in space, we had to weigh our options very carefully.”

Moll and a team of NASA doctors decided blood thinners would be the best course of treatment for the astronaut. They were limited in their pharmaceutical options, however. The ISS keeps only a small supply of various medicines on board, and there was a limited amount of the blood thinner Enoxaparin (Lovenox®) available. Moll advised NASA on what dosage of Enoxaparin would effectively treat the DVT while also lasting long enough until NASA could get a new shipment of drugs – which Moll helped select – to the ISS.

The course of treatment with Enoxaparin – a drug delivered by an injection into the skin – lasted for around 40 days. On day 43 of the astronaut’s treatment, a supply of Apixaban (Eliquis®) – a pill taken orally– was delivered to the ISS by a supply spacecraft.

Throughout the treatment process, which lasted more than 90 days, the astronaut performed ultrasounds on their own neck with guidance from a radiology team on Earth in order to monitor the blood clot. Moll was also able to speak to the astronaut during this period through email and phone calls. 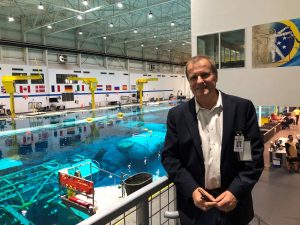 “When the astronaut called my home phone, my wife answered and then passed the phone to me with the comment, ‘Stephan, a phone call for you from space.’ That was pretty amazing,” said Moll. “It was incredible to get a call from an astronaut in space. They just wanted to talk to me as if they were one of my other patients. And amazingly the call connection was better than when I call my family in Germany, even though the ISS zips around Earth at 17,000 miles per hour.”

Four days before the astronaut’s journey home to Earth, they stopped taking Apixaban. Moll and his NASA counterparts made that decision because of how physically demanding and potentially dangerous the re-entry process can be for astronauts, and they did not want an injury to be exacerbated by the use of blood thinners. The astronaut landed safely on Earth and the blood clot required no more treatment.

This astronaut’s blood clot was asymptomatic – they didn’t have any symptoms that would have otherwise made them aware of the clot. The DVT was discovered when the astronaut was taking ultrasounds of their neck for a research study on how body fluid is redistributed in zero gravity. If it wasn’t for the study, there’s no telling what the outcome could have been. That’s why Moll continues to work with NASA and says there’s a need for more research of how blood and blood clots behave in space.

“Is this something that is more common in space?” posed Moll. “How do you minimize risk for DVT? Should there be more medications for it kept on the ISS? All of these questions need answering, especially with the plan that astronauts will embark on longer missions to the moon and Mars.”