UNC School of Medicine
Skip to main content
UNC Health and UNC School of Medicine
Newsroom
The UNC Health logo falls under strict regulation. We ask that you please do not attempt to download, save, or otherwise use the logo without written consent from the UNC Health administration. Please contact our media team if you have any questions.
Home / Migrated / Family on the Frontline: The Healthcare Workers behind the UNC-Chapel Hill Respiratory Diagnostic Center

When the need arose for a COVID-19 testing site at the Medical Center in Chapel Hill, a team began to assemble – a team that became a family filled with health care workers who stepped up during an unprecedented challenge and fulfilled essential roles they never thought they would experience.

CHAPEL HILL, NC – It’s already warm and humid at 8:45 in the morning as 35 UNC Health workers at the Medical Center’s Respiratory Diagnostic Center (RDC) assemble for a huddle.

“We check in with all RDC staff, go over morning projections for the day, how many patients we saw the prior day, provide any update on positivity rates, and answer any questions that the team may have,” said Stacy Scott, NP, Lead Provider at the RDC.

At 9 a.m. the RDC opens to patients. Several cars are already lined up in a carefully orchestrated queue that snakes its way through the parking lot of the Ambulatory Care Center. When the RDC opened in March, Amir Barzin, DO, assistant professor in the UNC Department of Family Medicine and Incident Commander for the RDC, said they were taking around 100 swabs a day. At the time that seemed like a big number. More recently, during the hot summer months, they take around 500 swabs a day, which means directing the number of drivers trying to navigate through the RDC has become more complicated. That’s why Barzin and other RDC organizers are especially glad to have some more experienced help.

“We partnered with UNC’s event parking staff to help direct traffic,” Barzin said. “They’ve been an amazing partner in this from the beginning. I would call them the unsung heroes of making sure people are staying safe.”

“We have a great team simply because we know why we are here – to fight this pandemic,” says Reggie Lendon, a UNC Traffic Supervisor. “There is a great sense of teamwork with the traffic officers and the RDC staff. We feel at home here, and that helps us do our jobs to keep people safe.”

Safety is top of mind for everyone at the RDC – safety for the people there to be swabbed and safety for health workers. There are multiple people on-site to make sure every single RDC team member is not only following safety guidelines on personal protective equipment (PPE), but also taking breaks, getting the food and water they need, and experiencing the emotional support that being a frontline worker can require.

“I make sure everyone is following the rules and wearing the proper PPE, and that they are properly and safely trained for the role they are playing,” said RDC Safety Officer Lainee Cummings, LPN, who up until March was an outpatient float nurse. “I also make sure everyone is feeling well. Even though our daily health surveys are now done online, I still like to see our team and personally ask how they are doing.”

There are multiple roles to fill at the RDC, and many team members are cross-trained so they can switch positions and fill in where needed. As a safety officer, Cummings is trained in every position and routinely jumps in to help. She’s also on-site six days a week, Monday through Saturday, to help keep things running smoothly. Obstacles do arise and they can appear in the form of weather, technology issues, or a very anxious patient who is having trouble coping with the gravity of being tested.

“Patients come in and they don’t know what to expect,” Barzin said. “They’re nervous because of what they’ve heard in the news about COVID-19. Some are worried because they are coming with their children to get tested. Our team does their best to make everyone feel comfortable and put them at ease.” “I noticed one patient was particularly upset and I just told them to take a moment and breathe and that it would be OK,” said Pat Hester, CMA II, who performs nasal-pharyngeal swabs at the RDC. “I explained what I was going to do and walked them through it as I took the swab. After we were done they thanked me for helping them calm down and said they wished they could give me a hug. I told them let’s save the hug for later and do an elbow tap instead.”

At the end of the day, the RDC team is there to help people during what could be one of the most daunting times of their life. These frontline healthcare workers show up when they are needed most, which can be worrying for their loved ones.

“My mother and my aunt live with me,” said Hester, who previously worked in the Infectious Diseases Clinic. “My family had anxiety about my work at the RDC at first, but once I explained what I would be doing and the precautions I would take, they were fine with it. And before I even go through the door when I get home, I change my clothes and then go straight to the shower.” 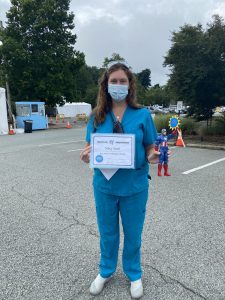 “I have a five-year-old son and a 14-year-old daughter,” said Scott. “I’ve given them reassurance that I’m in a safe place at work. I tell them how vigilant we are at following the PPE measures and rules that have been approved by Infection Control for us.”

Something to be noted of this group and its leaders is how much admiration and respect they hold for one other. From keeping each other safe to adapting to changing circumstances together, they have formed a team they are proud of.

“The staff are just amazing,” said Jeff Lynch, BN, RN, RDC Site Manager. “They fill the role that we need them to fill, they never complain about the weather, and the providers we work with are outstanding. It’s just a great team and this is a once in a lifetime opportunity to help set this up and see it through to the end.”

“It’s like a modern-day version of the TV show MASH,” said Cummings, who served as a medic in the U.S. Air Force. “When I was in the military we had a setup similar to this for a different situation, but it feels like home to me in the civilian world. And we do feel like a family.”

“It’s been amazing working with Dr. Barzin and Dr. David Wohl. They’re great leaders and I really enjoy being part of the RDC with them,” Scott said.

“This is something we’ll never forget and that will show up in the history books,” Cummings said. “We may never see a pandemic again, or we may see several. If we see another then we’ve learned how to better handle the next one. But right now every patient we test, whether they have a positive or negative result, we are somehow making an impact in their life. And they’re making an impact in our life too.”

UNC Health also has Respiratory Diagnostic Centers in other locations throughout the region to serve the needs of our communities.