UNC School of Medicine
Skip to main content
UNC Health and UNC School of Medicine
Newsroom
The UNC Health logo falls under strict regulation. We ask that you please do not attempt to download, save, or otherwise use the logo without written consent from the UNC Health administration. Please contact our media team if you have any questions.
Home / Awards, Rankings and Recognitions / Grad Student Kaitlan Smith Reflects on Lumbee Heritage While Embarking on Curiosity-driven Science

Pharmacology graduate student Kaitlan Smith was recently awarded a diversity supplement from the National Institute on Aging (NIA) to study the effects of aging and necroptosis. She shares her resilient journey into scientific research while reflecting on her Lumbee roots.

It’s a lived experience that catapulted 25-year-old Kaitlan Smith into the world of biomedical research.

“I grew up playing competitive softball. It was my dream to go to college and play my favorite sport,” said Kaitlan Smith, PhD candidate in the Department of Pharmacology at the UNC School of Medicine.

But when she was 11-years-old she feared that day would never come as she started to notice symptoms that wouldn’t disappear. 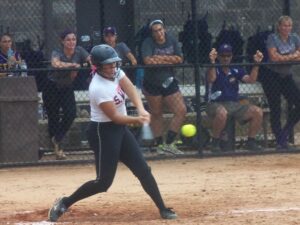 “When I really started to get into competitive play I would begin to break out in unusual hives,” said Kaitlan. “They would randomly appear whenever I worked out, got hot or played sports. It really hindered my love for playing the game.”

Kaitlan was diagnosed with chronic idiopathic urticaria – a medical term for chronic hives. It develops on the skin as itchy raised bumps or welts that appear and reappear over the course of six weeks or more. The cause is unknown.

“The hives would cover my entire body,” said Kaitlan.

Kaitlan lived with this life-altering skin condition for six years until she turned 17, and doctors prescribed a new medication called Xolair, which changed her quality of life overnight. The anti-itch drug not only helped ease her symptoms but made her appreciate how novel drug development and therapies can dramatically change lives.

“I was always interested in pursuing a science-focused career, but it wasn’t until my senior year in high school when I realized that sometimes it really wasn’t about curing a condition; it’s about providing comfort and an increased quality of life to those who are suffering,” Kaitlan said. “I enjoyed my time when I started at The University of North Carolina at Pembroke without having to worry about my chronic hives because, thankfully, people began to learn about chronic idiopathic urticaria and decided to do research on it. Because of this, I went into graduate school at UNC-Chapel Hill, wanting to learn more about rare diseases because I know that for some people, it feels really hopeless.” Kaitlan is now a graduate student with a research focus on aging and neurodegeneration in the lab of Jonathan Schisler, PhD, assistant professor of pharmacology and member of the UNC McAllister Heart Institute. She was recently awarded a diversity supplement from the National Institute on Aging (NIA) for a project titled “Organotypic Slice Culture Model of CHIP Mediated Neuroprotection,” to study protein quality control mechanisms in cerebellar ataxia. This $140,000 two-year supplement will provide funding and support for Kaitlan to establish an organotypic slice culturing model to study the effects of aging and necroptosis on mitochondrial function; attend writing workshops and dedicated grant-writing time, including a mock review of an F99/K00 proposal for a postdoctoral fellowship to continue her work in aging biology. Her graduate work goal is to understand the role that the C-terminus of HSP-70 Interacting Protein (CHIP) has in protecting neurons against harmful stimuli that has been known to cause neurodegeneration.

“This is especially cool because it’s very hard to know exactly what’s happening in the brain on a molecular level in a live animal,” said Kaitlan. “For the most part we can only see molecular effects postmortem. However, this model will allow us to keep part of the brain alive and working so that we can analyze the effects in real time.”

Kaitlan’s thesis revolves around a disease known as Spinocerebellar Ataxia Autosomal Recessive 16 (SCAR16). SCAR16 is a type of ataxia. Ataxia is an umbrella term that refers to a group of neurodegenerative diseases that generally impact the cerebellum and cause loss of voluntary motor coordination. People with ataxia often have difficulties with walking, swallowing, speaking, tracking objects with their eyes, etc.

Previous Schisler lab researchers discovered that SCAR16 is caused by mutations in the C-terminus of HSP-70 Interacting Protein (CHIP) leading to a type of inflammatory cell death (necroptosis) and neurodegeneration in the cerebellum. Kaitlan says that most patients with SCAR16 do not start seeing symptoms until their mid to late thirties, suggesting that age and specifically the process of aging has something to do with necroptosis and neurodegeneration leading to disease onset.

“Right now, I’m conducting a yearlong behavior study where I’m looking at candidate therapies for SCAR16,” said Kaitlan. “We have several different mouse models that exhibit the same phenotypes as those diagnosed with SCAR16. After this, I’ll be able to see which mutations are the most impactful in causing ataxic phenotypes and cognitive dysfunction.”

Kaitlan’s goal is to determine whether these novel treatments will alleviate the symptoms of ataxia or not, a critical step in creating effective therapies for SCAR16.

Paving the Way with Lumbee Roots

Opening new doors to treatments to help those with unmet medical needs is at the core of Kaitlan’s research. The experience she had during her time at UNCP instilled in her the importance of opportunity and giving back to her community. The Fuquay-Varina native is a proud member of the Lumbee Tribe of North Carolina, the largest Native American tribe east of the Mississippi River.  Kaitlan makes it her mission to advocate for more opportunities that Natives and other underrepresented communities around North Carolina could have access to. 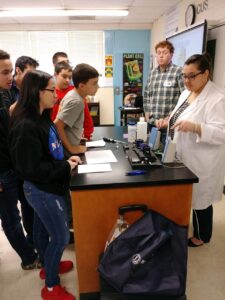 “Towards this goal, I have participated in several programs around UNC-Chapel Hill with the aim to increase diversity in STEM and provide opportunities to underrepresented minorities, such as the Pharmacology Departments Carolina Summer Fellows (CSF) program,” she said.

Within this program, Kaitlan not only successfully advocated for two spots for UNCP students but was also invited to become an ambassador for the program where her main role was to mentor students through the lab environments and provide them with scientific communication skills. She has also worked as a consultant of a new genomics training program at UNC-Chapel Hill entitled Educational Pathways to increase Diversity in Genomics (EDGE), where her role was to help recruit Native students from across North Carolina. She’s also heavily involved in the Initiative for Maximizing Student Development (IMSD) program at UNC-Chapel Hill, where she had the opportunity to become a peer mentor to first-year Biological & Biomedical Sciences Program (BBSP) students and an academic coach for the Pharmacology 701 class.

At UNCP, Kaitlan worked with the biology department and the UNCP-RISE program, and she’s led several workshops on her experience and research in graduate school, how to approach professional networking, and how to master scientific communication.  She’s also contributed her expertise to Project 3C, a program that aims to provide education to Native American students in grades 1-12 about STEM and the different opportunities and career paths that are available to them.

“This program is very significant to the community because it is one of the first federal grants that was awarded to the Lumbee Tribe of North Carolina and is funded by the U.S. Department of Education’s Office of Indian Education,” Kaitlan said. “My main role has been to impart knowledge about the field of pharmacology and to carry out interactive activities to demonstrate the work that scientist do.” 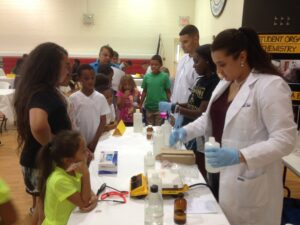 Kaitlan has gained a unique sense of purpose while immersing herself in her community, making an impact on her peers and setting the standard. From experiencing the physical ramifications of chronic hives at a young age to making her mark as a proud member of the Lumbee Tribe, this ambitious scholar has established her blueprint in the world of scientific pharmacology research. With the end goal to maintain and increase a workforce of culturally connected and committed Native and underrepresented researchers, Kaitlan aims to continue to move the needle in discovering new therapies for rare diseases while also paving the way for future scientists like her to walk in her footsteps. Kaitlan’s long-term goals include becoming an academic researcher and professor at a teaching college like UNCP.

“As one of the few Native American women from the Lumbee Tribe to pursue a PhD, I’m determined to push forward with my scientific training so that I can aid in the advancement and representation of Native Americans in the scientific community,” said Kaitlan. “The road to having a truly diverse scientific community is long and often lonely, but I am determined to continue walking so that, one day, I won’t be walking alone.”