UNC School of Medicine
Skip to main content
UNC Health and UNC School of Medicine
Newsroom
The UNC Health logo falls under strict regulation. We ask that you please do not attempt to download, save, or otherwise use the logo without written consent from the UNC Health administration. Please contact our media team if you have any questions.
Home / Migrated / “White Coats Black Doctors” builds legacy, plans for the future

There’s a lot more to White Coats Black Doctors than the t-shirts. You’ve seen them around UNC, around Chapel Hill, around the country, shirts with the White Coats Black Doctors’ logo – a raised fist holding a stethoscope. At first, Celeste Brown said the five co-founders of WCBD made a few shirts, just for themselves and their friends. They wore them around the UNC School of Medicine and to national conferences. The reaction was overwhelmingly positive. They created an online store and orders began coming in.

While excited by the reaction, Brown and her WCBD co-founders – Jenay Powell, Anthony McClenny, Kevin Courts, and Spencer Carter – have worked to make certain that the merchandise doesn’t overshadow the message.

“The merch definitely leaves an impression on folks,” Brown said. “Our activism has to do the same thing.”

In the four years since WCBD’s founding, the group has grown, diversified its philanthropic aims, won awards, and reached back to offer advice and support to a younger generation of students.

“Jenay, Spencer, Anthony, Kevin, and I met in August 2014 as strangers,” Brown said. “Today, some of my most cherished memories from medical school include these four people, and all of the time we’ve shared doing the work of our organization.”

The group started in 2014 as a group text chat between the minority (mostly African or African-American) students in the Class of 2018. As new medical students, they wanted to stay in contact and offer each other support. Brown titled their group chat “White Coats Black Doctors.”

From there, it was used as a hashtag on Instagram and other social media. But it really took off when the group had the slogan printed on shirts, which they wore to the annual Student National Medical Association conference in New Orleans.

As proceeds from the shirts began rolling in, the group knew exactly what they wanted to do with the money.

Four of the five co-founders of WCBD are alumni of the MED program and they have all benefited from the support and counsel of Cedric Bright, MD, Associate Dean for Inclusive Excellence, who spearheads MED. Early on, the co-founders designated MED as an official beneficiary of funds raised through the sale of the WCBD merchandise.

For Brown and her co-founders, that designation represented a formalized step forward for WCBD. Soon after, they officially established themselves as a 501c3 nonprofit and began branching out to a number of other initiatives, all supported by apparel sales and donations.

There are micro-grants for students on other campuses who would like to hold events, discussions, or summits celebrating the value of increasing diversity in medical education.

Brown said the group sends an event toolkit with shirts, as well as some guidance on conversation topics and other resources.

They have also established the Future Physician Awards, which have thus far been used to fund MCAT registration fees for two students. 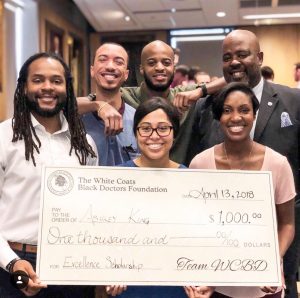 “It is inspiring that five students can come together and make such an impact,” King said. “I am humbled to be the first recipient of the White Coats Black Doctors Excellence Scholarship.”

The Importance of Evidence

In her speech presenting the WCBD Excellence Scholarship, Brown said a goal of WCBD has always been to help younger students interested in medicine understand the steps necessary to be accepted to medical school and ultimately succeed there.

“One of the key things that I have learned in medical school is about the importance of evidence,” Brown said. “A goal for WCBD is to set an example to young black boys and girls that they can become medical professionals. We are the evidence that they can do it.”

Surrounded by boxes of pizza, plates, and two-liters of soda, Jenay Powell sat casually on a table. Her hoodie was halfway zipped revealing scrubs underneath. The hoodie, she explained to the undergraduates in attendance, was meant to cover the stains of apple sauce flung on her by a pediatric patient earlier in the day. Over the course of a few hours, Powell – along with Anthony McClenny, Tiffany Dyer, and Amalia Osborne – broke down exactly what it takes to succeed as a medical student. They explained the paths they took, the ups, the downs, the apple sauce that sometimes gets thrown in your direction.

They answered questions about research, taking time off between college and medical school, applications, letters of recommendation, and the pros and cons of going to medical school in a foreign country. The tone was conversational and friendly. The students in attendance appreciated hearing from students so close to their own age, who so clearly remembered sitting where they sat only a few years previous.

The co-founder group and a small subset of their original 2014 classmates have done similar visits at universities across North Carolina and beyond. They have also expanded their reach through the White Coats Black Doctors Ambassador Program. Medical, dental, pharmacy, or veterinary students from across the country can apply to become Ambassadors. Once accepted into the role, they present to local high school and college students about the path to medical school. WCBD provides funds for travel and food.

WCBD Ambassadors are positive role models to young students interested in medicine. They represent the future aspirations of potential medical students, and can be mentors and sources of encouragement, simply by showing up and showing they care. 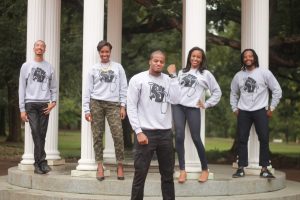 As a student-led organization, turnover is inevitable, but White Coats Black Doctors has done extensive planning to make certain the organization’s mission is sustained and enhanced in the coming years.

A large part of the future will be the Ambassadors program. WCBD has engaged the UNC School of Medicine’s Student National Medical Association to continue building a team of ambassadors, which WCBD has already done successfully at Wake Forest School of Medicine.

They also want to expand to involve more resident physicians in their work.

Jenay Powell, who is completing her MD along with the Literature, Medicine and Culture Master’s program, and Anthony McClenny, who is completing the MD/MPH dual degree program, will run the WCBD day-to-day operations next year. They are looking among the UNC School of Medicine student body for coordinators to assist in those daily operations. Beyond that, the group has a plan and organizational structure in place to sustain itself for years to come.

“I’m very proud of the work we have done so far, and I remain ambitious about expanding our work to reach more students in the future,” Brown said. “The feedback we receive from our supporters and the students we mentor reaffirms my belief that what we are doing is meaningful, effective, and necessary. So, we’ll press on together and I look forward to the challenges and triumphs to come.”