UNC School of Medicine
Skip to main content
UNC Health and UNC School of Medicine
Newsroom
The UNC Health logo falls under strict regulation. We ask that you please do not attempt to download, save, or otherwise use the logo without written consent from the UNC Health administration. Please contact our media team if you have any questions.
Home / Biology / Scientists Discover Intricacies of Serotonin Receptor Crucial for Better Therapeutics

By crystalizing a serotonin receptor bound to several common compounds, UNC School of Medicine scientists led by Bryan L. Roth discovered how slightly different drugs can cause severe side effects or none at all. The findings should accelerate the design of safer and more effective medications for a variety of conditions.

CHAPEL HILL, NC – Serotonin, known as the “happiness” neurotransmitter, is a chemical found in the body responsible for feelings of well-being. But serotonin isn’t the only chemical that binds to the 13 serotonin receptors found on the surface of cells. Far from it. Many approved drugs also bind to serotonin receptors. And one of these receptors – called 5-HT2BR – has made drug developers very unhappy. That’s because some drugs that treat Parkinson’s disease, migraines, pituitary tumors, and obesity were designed to target other cellular receptors but also activate 5-HT2BR, leading to life-threatening valvular heart disease. As a result, many of these drugs have been pulled from the market.

Now, for the first time, UNC School of Medicine scientists have figured out precisely why one drug binds to 5-HT2BR and activates the receptor to cause heart problems while very similar drugs do not. They’ve also discovered why a third drug acts like a 5-HT2BR antagonist – it blocks the receptor’s activity – while the very well-known similar hallucinogenic drug LSD does not.

Published in Nature Structure & Molecular Biology, this research provides drug developers with much needed insight into this serotonin receptor and other similar ones.

“For a long time, we’ve needed to know precisely how this receptor and others bind to various compounds if we want to design safer and more effective medications,” said senior author Bryan L. Roth, MD, PhD, the Michael Hooker Distinguished Professor of Protein Therapeutics and Translational Proteomics in the Department of Pharmacology. “Solving the crystal structures of these serotonin receptors bound to several compounds is the essential first step needed to create better medications, not only for the aforementioned conditions but for many others including schizophrenia, anxiety, and depression.”

In experiments led by John McCorvy, PhD, who was a postdoctoral fellow in the Roth lab during this research, scientists painstakingly induced the receptors to condense into a tightly packed crystal lattice while the receptors were attached to a drug. Then they shot X-rays at the crystal to calculate the receptor’s structure from the resulting diffraction patterns. McCorvy and colleagues did this several times to crystalize serotonin receptors bound to several different compounds, which had been impossible for decades because receptors are notoriously fickle proteins – small, fragile, and typically in motion as they bind to compounds.

The scientists then used other experimental techniques outlined in the paper to show precisely how each drug either activated or didn’t activate the receptor. 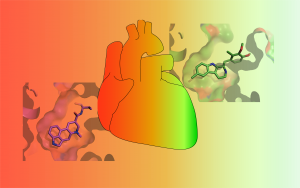 In one set of experiments, McCorvy and colleagues showed that methylergonovine – the active ingredient in a migraine medication – binds to a particular region of 5-HT2BR and activates it. Methylergonovine is an agonist. But its parent compound, methysergide, does not activate the receptor, making it an antagonist. Roth’s lab discovered the difference between the two drugs is just one carbon atom and a few hydrogen atoms. Together they’re called a methyl. This tiny methyl turns out to be the culprit in heart valve problems related to 5-HT2BR.

In a second set of experiments, they showed why the Parkinson’s drug lisuride does not activate 5-HT2BR but LSD does. The difference at the binding site is just a single nitrogen atom and stereochemistry – essentially the space between the drug and the receptor that plays a role in how precisely any drug might fit into the receptor to trigger or stop cellular activity.

Interestingly, lisuride and LSD bind to the serotonin receptor at the typical region scientists would expect. But the chemistry of how those two drugs bind at that site does not explain their very different effects on cells and people. McCorvy and colleagues found that lisuride is also wedged into another part of the receptor called the extended binding pocket, but lisuride’s contact is not strong. LSD on the other hand binds strongly at the extended binding pocket, making LSD a very strong agonist – it activates 5-HT2BR (as well as other receptors). LSD does so by recruiting a protein called beta-arrestin2. Scientists call this process “activating the β-arrestin pathway,” and it has been implicated in various side effects related to therapeutics.

These findings will help drug designers avoid activating 5-HT2BR when designing medications to target other receptor proteins – commonly referred to a G-protein coupled receptors, or GPCRs. Conversely, this research will help drug developers who want to inhibit the activation of 5-HT2BR to treat valvular heart disease and other disorders.

“Basically, by crystalizing the structures of 5-HT2BR bound to several common drugs, we found there’s no one mechanism by which the receptor is activated,” McCorvy said. “There are several.” To create a precise, safe, and effective medication, scientists want to exploit only the cellular pathways important for treating the condition they’re interested in. McCorvy added, “That’s the cutting edge of drug development.”

The NIH funded this work. Bryan Roth has a joint appointment in the UNC Eshelman School of Pharmacy and the UNC Lineberger Comprehensive Cancer Center.