UNC School of Medicine
Skip to main content
UNC Health and UNC School of Medicine
Newsroom
The UNC Health logo falls under strict regulation. We ask that you please do not attempt to download, save, or otherwise use the logo without written consent from the UNC Health administration. Please contact our media team if you have any questions.
Home / Migrated / Smart Artificial Beta Cells Could Lead to New Diabetes Treatment

CHAPEL HILL, NC – Treating type 1 diabetes and some cases of type 2 diabetes has long required painful and frequent insulin injections or a mechanical insulin pump for insulin infusion. But researchers from the University of North Carolina and NC State have now developed what could be a much more patient-friendly option: artificial cells that automatically release insulin into the bloodstream when glucose levels rise.

These “artificial beta cells” (AβCs) mimic the functions of the body’s natural glucose-controllers, the insulin-secreting beta cells of the pancreas. The loss or dysfunction of these cells causes type 1 diabetes and many cases of type 2 diabetes. The idea is that the AβCs could be subcutaneously inserted into patients, which would be replaced every few days, or by a painless and disposable skin patch.

As the researchers report in Nature Chemical Biology, a single injection of the AβCs into diabetic mice lacking beta cells quickly normalized the animals’ blood glucose levels and kept those levels normal for up to five days.

“Our plan now is to further optimize and test these synthetic cells in larger animals, develop a skin patch delivery system for them, and ultimately test them in people with diabetes,” said principal investigator Zhen Gu, PhD, a professor in the Joint UNC/NC State Department of Biomedical Engineering. Gu also holds appointments in the UNC School of Medicine, the UNC Eshelman School of Pharmacy, and the UNC Diabetes Care Center.

At least six million people in the United States use insulin as a diabetes treatment, either by injection or a mechanical pump. So far, delivered insulin in pill form has been challenging because it’s a large molecule that would be destroyed by digestive enzymes and acids before it could reach the bloodstream.

The major problem with current insulin treatments, however, is not that they can’t be delivered in a pill, but that they can’t control blood glucose levels automatically and efficiently, as normal insulin-secreting pancreatic cells do. Transplants of pancreatic cells can solve that problem in some cases. However, such cell transplants are expensive, require donor cells that are often in short supply, require immune-suppressing drugs, and often fail due to the destruction of the transplanted cells. 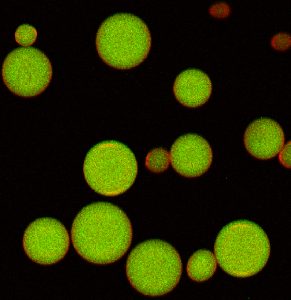 Gu and colleagues have been researching solutions to the insulin-delivery problem for much of the past decade. For this project, they adopted a particularly ambitious approach: making artificial cells that, to a great extent, do what natural pancreatic beta cells do.

Gu’s AβCs are constructed with a simplified version of a normal cell’s two-layered lipid membrane. The key innovation is what these cells contain: specially designed, insulin-stuffed vesicles. A rise in blood glucose levels leads to chemical changes in the vesicle coating, causing the vesicles to start fusing with the AβC’s outer membrane – thus releasing the insulin payloads.

“This is the first demonstration using such a vesicle fusion process for delivering insulin that employs insulin-containing vesicles like those found in a beta cell and can reproduce the beta cell’s functions in sensing glucose and responding with insulin ’secretion’,” said Zhaowei Chen, PhD, a lead author and postdoctoral researcher in Gu’s lab.

The AβCs showed a rapid responsiveness to excess glucose levels in lab-dish tests and in diabetic mice without beta cells. “The mice went from hyperglycemic to normoglycemic within an hour, and they remained normoglycemic for up to five days after that,” Gu said. Control mice injected with no-insulin AβCs remained hyperglycemic.

Gu and colleagues plan further preclinical tests and expect to develop a method for delivering the cells painlessly via a skin patch that could be simply replaced.

Co-author John Buse, MD, PhD, the Verne S. Caviness Distinguished Professor at UNC, chief of the division of endocrinology, and director of the UNC Diabetes Care Center, said, “There is still much work needed to optimize this artificial-cell approach before human studies are attempted, but these results so far are a remarkable, creative first step to a new way to solve the diabetes problem using chemical engineering as opposed to mechanical pumps or living transplants.”

Gu and his team are also working separately on a cell-free skin patch, a “smart insulin patch” that senses blood glucose levels and secretes insulin into the bloodstream as needed.