UNC School of Medicine
Skip to main content
UNC Health and UNC School of Medicine
Newsroom
The UNC Health logo falls under strict regulation. We ask that you please do not attempt to download, save, or otherwise use the logo without written consent from the UNC Health administration. Please contact our media team if you have any questions.
Home / News / Whole Genome Sequencing Reveals Genetic Structural Secrets of Schizophrenia

A study co-led by Jin Szatkiewicz, PhD, Patrick Sullivan, MD, and colleagues at UNC-Chapel Hill and four Swedish universities found that extremely rare variants affect the boundaries of a 3D genome structure called topologically associated domains in people with schizophrenia much more than they affect people without the condition.

A study co-led by Jin Szatkiewicz, PhD, Patrick Sullivan, MD, and colleagues at UNC-Chapel Hill and four Swedish universities found that extremely rare variants affect the boundaries of a 3D genome structure called topologically associated domains in people with schizophrenia much more than they affect people without the condition.

CHAPEL HILL, NC – April 16, 2020 – Most research about the genetics of schizophrenia has sought to understand the role that genes play in the development and heritability of schizophrenia. Many discoveries have been made, but there have been many missing pieces. Now, UNC School of Medicine scientists have conducted the largest-ever whole genome sequencing study of schizophrenia to provide a more complete picture of the role the human genome plays in this disease.

Published in Nature Communications, the study co-led by senior author Jin Szatkiewicz, PhD, associate professor in the UNC Department of Genetics, suggests that rare structural genetic variants could play a role in schizophrenia. Patrick Sullivan, MD, the Yeargen Distinguished Professor of Psychiatry and Genetics at the UNC School of Medicine and Director of the Center for Psychiatric Genomics, is co-senior author.

“Our results suggest that ultra-rare structural variants that affect the boundaries of a specific genome structure increase risk for schizophrenia,” Szatkiewicz said. “Alterations in these boundaries may lead to dysregulation of gene expression, and we think future mechanistic studies could determine the precise functional effects these variants have on biology.”

Previous studies on the genetics of schizophrenia have primarily involved using common genetic variations known as SNPs (alterations in common genetic sequences and each affecting a single nucleotide), rare variations in the part of DNA that provide instructions for making proteins, or very large structural variations (alterations affecting a few hundred thousands of nucleotides). These studies give snapshots of the genome, leaving a large portion of the genome a mystery, as it potentially relates to schizophrenia.

In the Nature Communications study, Szatkiewicz and colleagues examined the entire genome, using a method called whole genome sequencing (WGS). The primary reason WGS hasn’t been more widely used is that it is very expensive. For this study, an international collaboration pooled funding from National Institute of Mental Health grants and matching funds from Sweden’s SciLife Labs to conduct deep whole genome sequencing on 1,165 people with schizophrenia and 1,000 controls – the largest known WGS study of schizophrenia ever.

As a result, new discoveries were made. Previously undetectable mutations in DNA were found that scientists had never seen before in schizophrenia. 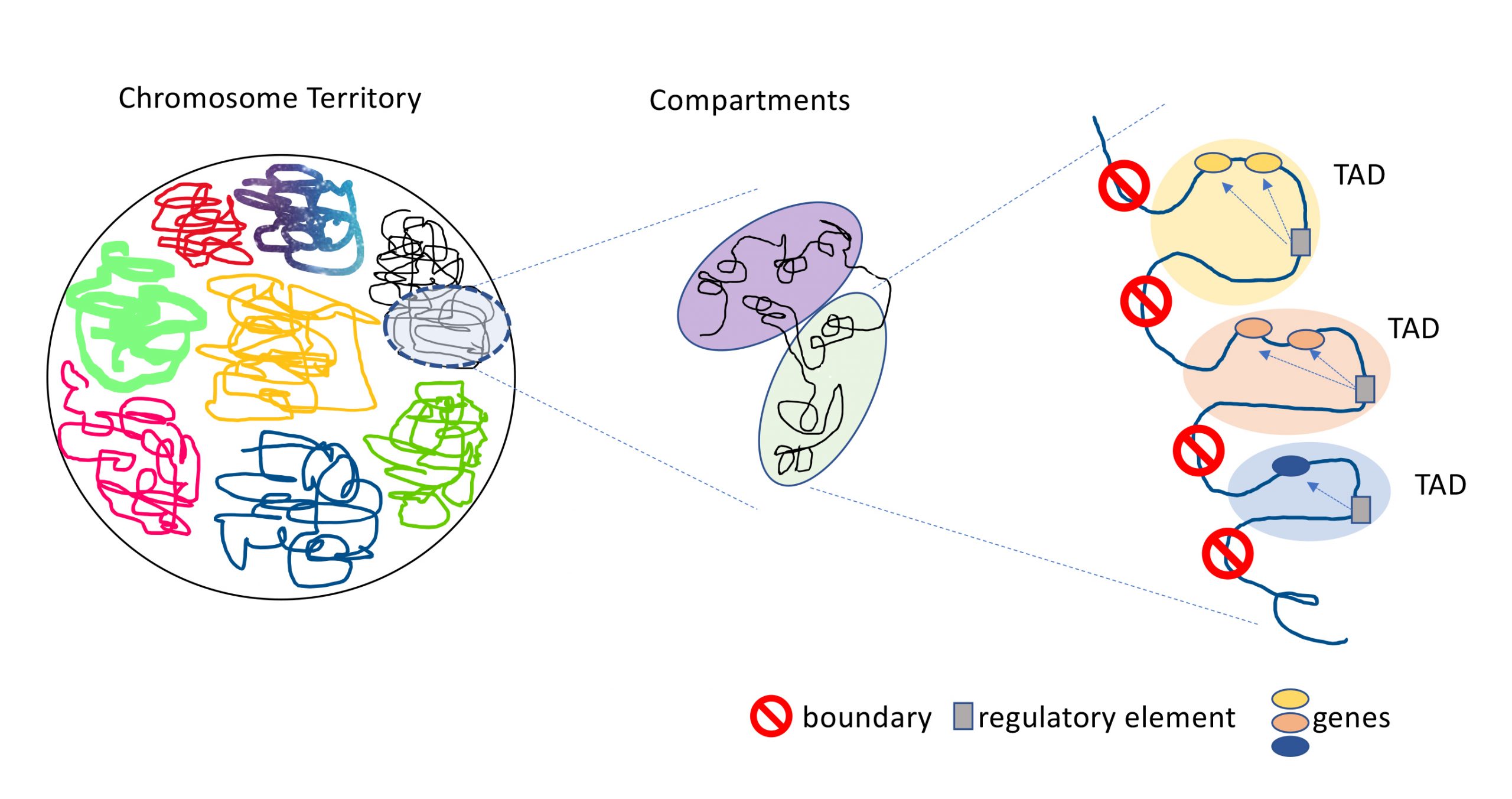 In particular, this study highlighted the role that a three-dimensional genome structure known as topologically associated domains (TADs) could play in the development of schizophrenia. TADs are distinct regions of the genome with strict boundaries between them that keep the domains from interacting with genetic material in neighboring TADs. Shifting or breaking these boundaries allows interactions between genes and regulatory elements that normally would not interact.

When these interactions occur, gene expression may be changed in undesirable ways that could result in congenital defects, formation of cancers, and developmental disorders. This study found that extremely rare structural variants affecting TAD boundaries in the brain occur significantly more often in people with schizophrenia than in those without it. Structural variants are large mutations that may involve missing or duplicated genetic sequences, or sequences that are not in the typical genome. This finding suggests that misplaced or missing TAD boundaries may also contribute to the development of schizophrenia. This study was the first to discover the connection between anomalies in TADs and the development of schizophrenia.

This work has highlighted TADs-affecting structural variants as prime candidates for future mechanistic studies of the biology of schizophrenia.

“A possible future investigation would be to work with patient-derived cells with these TADs-affecting mutations and figure out what exactly happened at the molecular level,” said Szatkiewicz, an adjunct assistant professor of psychiatry at UNC. “In the future, we could use this information about the TAD effects to help develop drugs or precision medicine treatments that could repair disrupted TADs or affected gene expressions which may improve patient outcomes.”

This study will be combined with other WGS studies in order to increase the sample size to further confirm these results. This research will also help the scientific community build on the unfolding genetic mysteries of schizophrenia.

This research was a collaboration between researchers at UNC-Chapel Hill, Lund University, Chalmers University of Technology, the Karolinska Institutet, and Uppsala University.