UNC School of Medicine
Skip to main content
UNC Health and UNC School of Medicine
Newsroom
The UNC Health logo falls under strict regulation. We ask that you please do not attempt to download, save, or otherwise use the logo without written consent from the UNC Health administration. Please contact our media team if you have any questions.
Home / Migrated / Customized Stent-Graft to Treat Aortic Aneurysms Saved the Life of Former UNC Professor Harvey Jeffries

Retired Professor in the UNC Gilling’s School of Public Health, Harvey Jeffries, has received care from UNC since 2002. In 2009 he was diagnosed with a juxtarenal abdominal aortic aneurysm, which was closely monitored until 2017 when his aneurysm reached a size requiring surgical intervention. He worked with Dr. Mark Farber, a leading UNC Vascular Surgeon, and his dedicated team of nurses and health care staff, who created a customized stent-graft to repair Harvey’s aneurysm.

Who is Harvey Jeffries?

A former professor in the UNC Gilling’s School of Public Health, Harvey Jeffries is no stranger to the UNC system. Born in Virginia, raised on a small farm in Fayetteville, Harvey spent his childhood days exploring the woods around his home, collecting specimens, and cataloging them with his microscope. He graduated from Florida Presbyterian College, now Eckerd College, in Florida with a Bachelor of Science in Chemistry before getting his Masters and Ph.D. from the University of North Carolina.

Jeffries spent his entire career at UNC before retiring as a Professor in the Department of Environmental Sciences and Engineering in 2010. His focus was on atmospheric chemistry, spending much of his time working with the EPA on topics of air pollution.

A man of science, dedicated to continued research and knowledge, Harvey first sought care from UNC back in 2002 when he became allergic to mold spores that had developed in his home.

Starting His Care with UNC

Over the years, he continued to seek support from doctors at UNC, making yearly trips for his annual physical with William J Yount, MD. “Dr. Yount had seen me for allergies and asthma,” explains Harvey. “He was the Reeves Professor of Rheumatology and Arthritis before he retired in 2018. It turns out he was just a spectacular old-fashioned doctor and took over my primary care. He found every freaking single problem I’ve ever had. I saw him about once a year. Every time I had a problem, I would go to Dr. Yount, and he would figure out what the problem was and send me to the right people.”

One such problem occurred in 2009, at age 66, Harvey went to Dr. Yount with some physical concerns. “The middle of the summer I get some kind of funny indigestion, some issues, some problems and I couldn’t figure out what’s going on,” describes Harvey. “I made an appointment with Dr. Yount and told him I thought I had gallstones or something.”

Dr. Yount first did an ultrasound on Harvey and found nothing concerning. He then sent him for an x-ray, and again the results came back negative. To make sure they were diligent in their search for a reason behind his symptoms, he requested a CAT scan of the abdomen.

“Dr. Yount called me a few days later, and he said, ‘Well, the good news is you don’t have gallstones. The bad news is you have a 3-centimeter abdominal aortic aneurysm.’ He told me there’s a really good guy here and you need to start seeing him. So, I met Dr. Farber.” 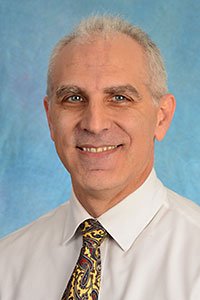 Mark Farber, MD, Chief of the Division of Vascular Surgery and Director for the Aortic Network, is a Vascular Surgeon specializing in aortic disease and complex minimally invasive aortic surgery. With more than 20 years of experience, Dr. Farber has built a comprehensive team of doctors, nurses, and staff that continue to move the needle forward in scientific discoveries related to treating vascular disease.

As a scientist, before his initial meeting with Dr. Farber, Harvey went home and started to research his new physician. “I read everything I could get my hands on,” explains Harvey. “I found out he was an undergraduate engineer. He has all these papers with everybody all over the world, doing comparisons and techniques and so on. I’m going holy cow. This is spectacular. I walked into my appointment with two and a half pages of questions. During that first meeting, he impressed me instantly, just blew me away.”

During their initial meeting, Dr. Farber explained the full diagnosis to Harvey. He had a juxtarenal abdominal aortic aneurysm. The aorta is the largest blood vessel in the human body and is connected to a network of arteries that supply most of the body with oxygen-rich blood. The aorta is one artery that starts at your heart and extends down towards the belly button, where it divides into the right and left common iliac arteries, extending down into the legs.

An aneurysm is an enlargement of the aorta wall where it has become weak due to multiple factors. Aneurysms are dangerous because they can rupture and cause massive internal bleeding.

Harvey’s aneurysm involved the kidney arteries, but he did not have aneurysmal disease above that. For Harvey, that meant his aneurysm was located in his lower torso, starting and including the renal arteries and continuing down the aorta towards the iliac arteries to the level of his umbilicus (belly button).

Based on the size of the aneurysm, about 3.8 centimeters (~1.5 inches), doctors agreed that the best course of action would be to monitor it. Based on previous studies, doctors didn’t want to move forward with major surgery—including the placement of a stent-graft—until the aneurysm reached a larger size, around 5 centimeters.

In most cases, aortic aneurysms can be treated with off-the-shelf stent-grafts. These medical devices are implanted inside the aorta. The stent-graft is comprised of a self-expanding stent typically covered with polyester to seal the vessel walls to prevent blood leaks feeding into the aneurysm. This new lining incorporates a sealing region at the top and bottom of the aneurysm thereby routing the blood through the stent-graft, relieving pressure on the artery wall, thereby preventing rupture.

Over the years, Dr. Farber and the vascular team at UNC watched Harvey, monitoring the size of his aneurysm. During that time, Dr. Farber continued to move his practice forward, starting a clinical trial study with the FDA in 2012 that included customized stent-grafts for patients.

“The state-of-the-art work we are doing involves minimally invasive treatment for patients with aortic problems,” explains Dr. Farber. “We have special programs with the FDA which gives us access to devices five to eight years ahead of FDA approval. These treatment options are only available to a handful of centers in the US. The early result suggests that this new treatment option may reduce major complications compared to open surgery.”

The clinical trial study that Dr. Farber is leading at UNC involves the creation of a stent-graft designed specifically for the individual patient. Through CT scans, Dr. Farber and his team take precise measurements of the anatomy of the patient. They work closely with the medical manufacturer and their engineering designer to customize the device to match the patient’s anatomy, providing a personalized approach to the patient’s repair.

The clinical trial allows Dr. Farber’s team to study the devices in a controlled environment. Potential patients must qualify for the program, meeting specific criteria, and agree to come back for multiple follow-up visits to track the device. It allows the team to collect data, do analysis, improve the devices, and help additional patients down the road.

“Most of the devices we implant are custom manufactured because everybody’s anatomy is different on the inside,” says Dr. Farber. “It takes knowledge and experience to know how even to design a device. About 20% of the time, our patients can use off-the-shelf stent-grafts with limited issues. However, the vast majority of our patients require some form of customization to make sure the blood flow in the artery we are treating is managed appropriately.”

In November 2017, at the age of 75, Harvey’s aneurysm peeked at 6.1 centimeters. Dr. Farber brought him in and started compiling measurements from CT scans, noting Harvey’s specific, individual anatomy. The design of the stent-graft took about two to three weeks. His team then sent the measurements to Cook Medical, located in Australia, with a production time of about four to six weeks. Once the hand-sewn stent graft was complete, it shipped to the states, and surgery was scheduled. In May of 2018, Harvey underwent a successful procedure.

The procedure typically involves implantation of the device via needle sticks in both groins. The components are inserted and then connected together inside the patient’s aneurysm with x-ray guidance. The procedure generally takes 3 hours to complete and the patient needs to be monitored in the hospital for several days after to recover. Most patients are back to full activity 4-6 weeks after surgery.

Recovery During the Study 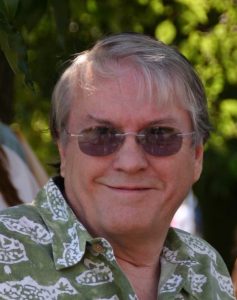 Harvey’s test results have all been positive since his surgery. During his first year after the surgery, Harvey met with Dr. Farber every three months. In his second year, he met with him every six months, and when he hits the two-year mark, he’ll start seeing him once a year for years three, four, and five.

With his surgery behind him, Harvey continues to consult all around the country. However, he makes sure he attends those follow-up appointments for his care. He talks highly of UNC and the care he received at the hospital but especially about Dr. Farber.

“He is just incredible, just freaking incredible,” exclaims Harvey. “That kind of understanding, commitment, research work is spectacular. Why wouldn’t you want a doctor like that? I can tell he gets pleasure from what he does. He is phenomenal. I’m shocked in a sense, why he is still at UNC since what he is doing is world-class. He made that clear. He told me it isn’t him; it’s his team. That it’s taken him years to get to this place and to have this kind of knowledge and cooperation and really it’s the team that supports him, his work, research, and the patients.”

“Managing complex medical problems and obtaining good results is not accomplished thru individual effort,” says Dr. Farber. “It requires a dedicated team of individuals working together to provide the best possible care necessary. It involves everyone who comes into contact with the patient during their care which includes the nurses, operating room staff, ICU team, technologists, and office staff.”