UNC School of Medicine
Skip to main content
UNC Health and UNC School of Medicine
Newsroom
The UNC Health logo falls under strict regulation. We ask that you please do not attempt to download, save, or otherwise use the logo without written consent from the UNC Health administration. Please contact our media team if you have any questions.
Home / Migrated / North Carolina Chief Medical Examiner Deborah Radisch Speaks About Medical Technology; Career Path in Forensic Pathology 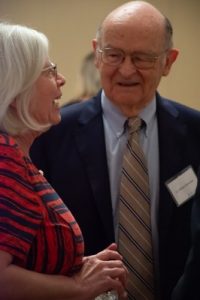 Deborah Radisch, a 1976 alumna of the then medical technology program, spoke to a crowd of donors to the Division of Clinical Laboratory Science about her education and career path, most recently serving as North Carolina’s chief medical examiner.

Her role as chief medical examiner has led to her involvement in several high-profile cases, including the trial of Michael Peterson, a Durham novelist and former mayoral candidate who faced murder charges following the death of his wife, Kathleen, in 2001.

Radisch said her family moved to North Carolina in 1969, and she chose to attend UNC-Chapel Hill as an undergraduate student because of the reputation of its medical technology program.

“I was lucky, and I got in,” Radisch said. “I decided that was what I wanted to do.”

Radisch said her background in medical technology positioned her well to pursue medicine. She also credits William McLendon, for whom UNC Health Care and UNC Hospitals’ McLendon Laboratories are named, with encouraging her to apply to medical school.

“He would make time to meet with us,” Radisch said. “He’s the one who said to me: ‘We have no time to waste. Let’s go for medical school.’”

Radisch said her training in medical technology taught her tangible skills, such as coordination and dexterity.

“That came from plating specimens and learning how to unscrew a vial cap,” she said. “I still remember the moment I thought ‘This is great; I can do this.’”

During her time in the program, she also learned confidence and professionalism.

“We were treated so well and with a lot of respect from our faculty,” Radisch said. “I don’t think I could be where I am today without my training. I’m very lucky that my training set me up for what I think was my very lucky niche in life.”

As chief medical examiner, Radisch and her colleagues’ work involves conducting autopsies, a task she compared to facilitating a laboratory test. In her role, she also works with medical students, law enforcement, and defense attorneys to educate and to train.

“As the labs become more specialized, the training becomes more specialized,” Radisch said. “The dedication of the people in this program preparing their graduates for these challenges is admirable.”

Susan Beck, the division’s director, said one of the best parts of her job is seeing graduates like Radisch succeed. 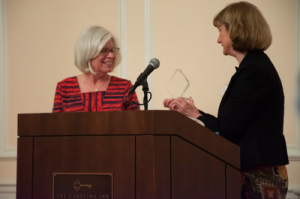 Radisch has served as chair of the North Carolina Child Fatality Prevention Team and received her Master of Public Health from the Gillings School of Global Public Health in 1997. She also served in the United States Army Reserve for nearly ten years.

Colleague and friend Margaret Johnson, also a 1976 graduate of the medical technology program said that Radisch has dedicated her life to her career.

“The people of North Carolina are indebted to her service,” Johnson said. Following her talk, Radisch received an award from the division to mark her service to the state as a distinguished alumna of the program.

“I am always amazed and impressed with what our graduates do with their talent and their degrees. I am also amazed and humbled with the support we get from our graduates. They care deeply about the education of current students.” Beck said.